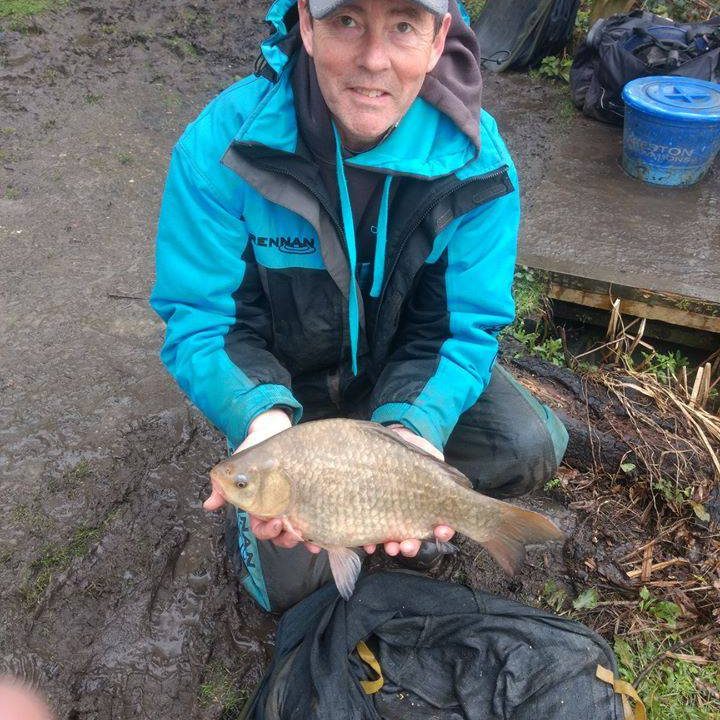 • 3 lb 6 oz crucian in Old Lake match
• Three Temple ‘twenties’ to 26 lb 15 oz for one angler
• Bonds Lake catch of six carp on feeder
• Tench and crucians from Milton Lake on pole
• Mild week ahead, before chilly week of frosts the week after

FISHERY OPENING TIMES
The fishery currently opens for day ticket fishing at around 7.00am on weekdays; 6.30am weekends and Bank Holidays. Current closing time is approximately 5.30pm.

THIS WEEK’S FISHING! (in brief)
The Old Lake has a small population of crucian carp that grow big, and one of them put in an early appearance in the latest Steve Gardener midweek contest.
Tony Morris landed the 3 lb 6 oz fish from peg 1, next to the Jungle, which is often the area where they are caught, though usually when the water has had a chance to warm a little more than at present.
Temple Lake is showing regular signs of fish being interested in feeding, three ‘twenties’ falling to regular David McCallum, the biggest 26 lb 15 oz, along with a first Temple fish, of 23 lb 12 oz, for Philip Wing.
There are still good numbers of carp to be caught on Bonds, lake regular Alan Derbyshire landing six on a Hybrid feeder cast close to the island.
And Milton Lake is showing signs of spring being not far away, numbers of tench and crucians being caught on pole and maggots.
Just a few days of the predator season to go, next Saturday being the last chance to fish for pike and zander until October.
There’s a real window of opportunity this week, with temperatures set to reach highs of 13 degrees C and a good deal of mild, sunny weather forecast, along with a spring-like pattern of sunshine and showers.
But make the most of this week because winter has a chilly sting in its tail for the week after, with frosty nights and bright but chilly days one after another, accompanied by easterly winds, and 13 degrees will seem like a dream.
Monday this week should be the sunniest day, being the Full Moon, with a high of 10, but a front moving in just before sunset is expected to bring heavy rain overnight, keeping values at a mild 7, into a dry but overcast day on Tuesday of 13, with 9 overnight into a fairly sunny Wednesday of 13 again, staying at 7 overnight into a day of sunshine and showers on Thursday of 9, falling to 3 overnight into more sunshine and showers on Friday and 10, with 5 overnight into a largely dry Saturday of 10, and 5 overnight into a Sunday of 7. But then temperatures take a tumble for the week after that, with a run of frosts every night and daytime highs of no more than 6 or 7 and maybe 3 or 4. Winds are expected to start this week as moderate westerlies on Monday, increasing to strong overnight into Tuesday and more south-westerly, the same but more westerly on Wednesday and Thursday, a bit lighter on Friday, but picking up again on Saturday and more south-westerly, and stronger and more westerly on Sunday and north-westerly on Monday week, before falling light on Tuesday as a run of north-easterlies arrives. So, a changeable week of classic spring-like weather with a mixture of dry, wet, cold, mild, sunny and overcast conditions, with a strongish wind from a fishy direction, offering a window of opportunity before the sting that’s expected the week after for the final week of winter, before the Spring Equinox on March 20, when the hours of daylight and darkness are equal.

If you catch a crucian carp in the Old Lake, there’s a good chance it will be a big one, which is what happened to Tony Morris in the latest Steve Gardener Wednesday contest, fished by 24.
Tony caught the 3 lb 6 oz fish from peg 1, boosting his catch to 12 lb 8 oz, in a match affected by low overnight temperatures, which meant Steve Gardener’s 25 lb 6 oz from peg 33, on the Long Bank, was enough to win.
Mark Parrett was second from peg 21 with 22 lb 12 oz, ahead of Simon Ellis, who was next to Steve and finished with 20 lb, Charlie Lovell fourth with 17 lb 12 oz from peg 37.
Best recent crucian carp from the Old Lake was a 4 lb 8 oz one caught by James Wilson in June 2016, on a dumbbell boilie, and there was also a 4 lb 4 oz fish caught in May 2013 from Milton Lake on double maggot.
On the carp front, fishery zander record holder Janusz Kansik had a day with his father, Jacek, at pegs 1 and 2, and together they landed two carp to 14 lb and one zander.

There are signs that the Temple Lake carp are being encouraged to feed by the lengthening daylight hours.
Lake regular David McCallum landed three ‘twenties’, the biggest 26 lb 15 oz, on a 48-hour visit, his first this year, fishing peg 13.
Also in action was Philip Wing, from Sutton, who opened his Temple account last Sunday with a first fish of 23 lb 12 oz, a mirror, which he caught from peg 3 on a Cherry Carp KMT (Kelp, Marine & Tangerine) boilie tipped with white fake corn and no free offerings.

Alan Derbyshire landed six carp in his latest session, at peg 12, using a Hybrid feeder and corn or bread on the hook, cast tight to the island.