Milton Lake has 30 pegs and is stocked with large numbers of tench, genuine crucian carp, roach, rudd, perch and bream, as well as a few smaller carp.

Milton Lake allows anglers to find a haven away from the tackle-busting doubles and 20-pounders that often muscle in elsewhere on the complex.

When the lake is on form, 50 crucians can be caught at a sitting, averaging over 2 lb apiece, and there have been catches of over 100 by a single angler, along with fish of over 3 lb, to just a couple of ounces under 4 lb.

In addition to the golden crucians, Milton has been developed as a specimen roach water, with fish from Bonds, which has produced them to 3 lb, being moved during netting operations to give anglers more chance to catch them without having their swim ‘crashed’ by double-figure carp.

At three acres, Milton offers 30 generously spaced pegs to tackle large shoals of tench, crucian carp, roach, rudd, perch, bream and carp. The policy to develop Milton has always been to limit both numbers and sizes of carp present, to allow anglers who enjoy sport from crucians, tench and other smaller species to find a quiet corner.

Carefully designed with anglers in mind back in 1991, Milton has been landscaped with both islands and subsurface, fish-holding areas to offer plenty of potential from all of the pegs. Thousands of lilies, reeds, irises, trees and selected shrubs have been planted to ensure the surroundings are as pleasing as the sport.

Milton’s tench reach 7 lb and there are also golden rudd, and while the crucians and carp are most active in summer, in winter Milton’s large shoals of specimen roach, rudd and perch get a look-in, and some impressive catches are made.

All methods work at Milton, from pole tackle, with its superior presentation at close quarters, up against reeds or lily pads, to waggler, feeder or bomb, for exploring further out or when conditions make float fishing tricky.

Soft hooker pellets, red or white maggots, casters, corn, worms, bread and meat are all reliable baits, and small balls of groundbait introduced on a regular basis seem to concentrate the fish. But in truth there is little that will not catch fish at Milton. 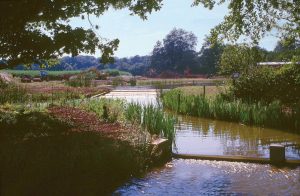 A unique feature of Old Bury Hill is one of the most advanced aeration systems ever built at a commercial coarse fishery. Increased oxygenation and water flow means healthy, hard-fighting fish and happy anglers. Even through prolonged periods of hot weather, Bury Hill’s aeration system prevents oxygen levels dropping, and fish becoming lethargic and refusing to feed. Since its installation in 1997, two huge corkscrew water pumps have shifted up to seven million gallons of water a day through the fishery. But you won’t find unsightly fountains that spoil the atmosphere. Instead, the water is silently removed and then returned through three inlets along the Island Bank, each one flowing with rejuvenated water.

As well as being a feature that attracts huge numbers of fish, making for excellent fishing, these flowing inlets also prevent the lake completely freezing during cold spells, meaning Bury Hill is a truly all-year-round fishery.

Bury Hill prides itself on beautiful carp in the best condition, to ensure that you catch the fish of your dreams. We enforce rules strictly to protect our stock from tackle dangers and poor handling. You will only be allowed to fish for carp if you adhere to the following rules:
• You must own a large, padded unhooking mat which must be wetted and used at all times that a carp is out of the water;
• Barbless hooks only;
• Carp must never be carried in the hands, only in a weigh sling or a zipped-up sling-style unhooking mat;
• No sacking of carp
• Landing nets must be dipped before you enter the fishery to guard against disease transmission;
• No permanently fixed leads. Bailiffs will check your rigs;
• No particle baits with the exception of sweetcorn and hemp.

You will be asked to leave the fishery without refund and/or your membership will be revoked if you break these rules.

Click here for a full listing of fishery rules and guidelines. 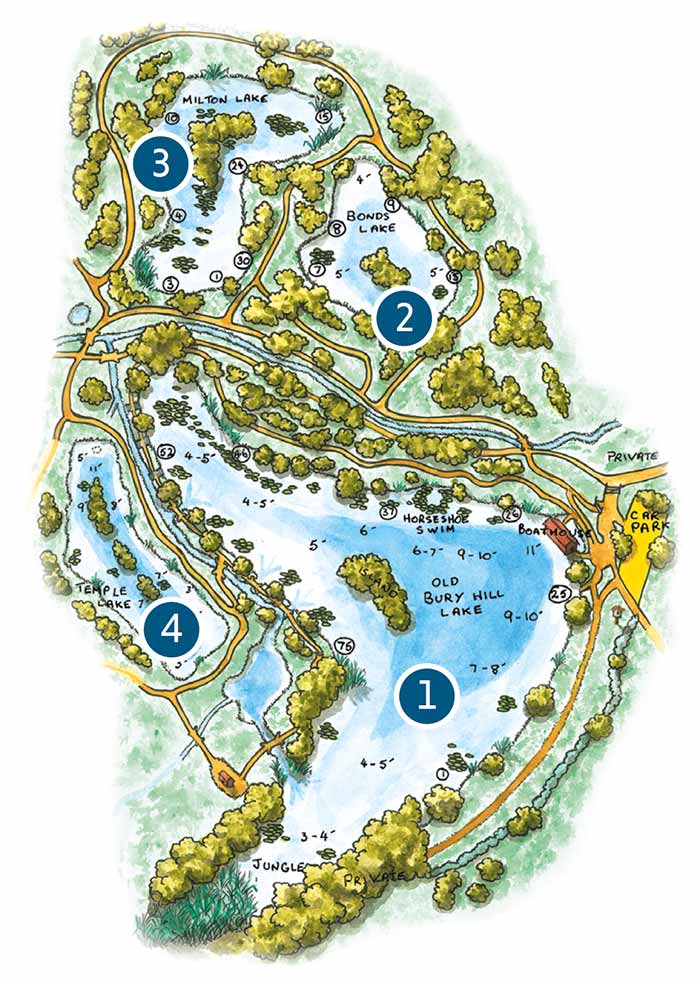 Bury Hill has 4 lakes offering fantastic fishing for all species. Click the links below to find out more…