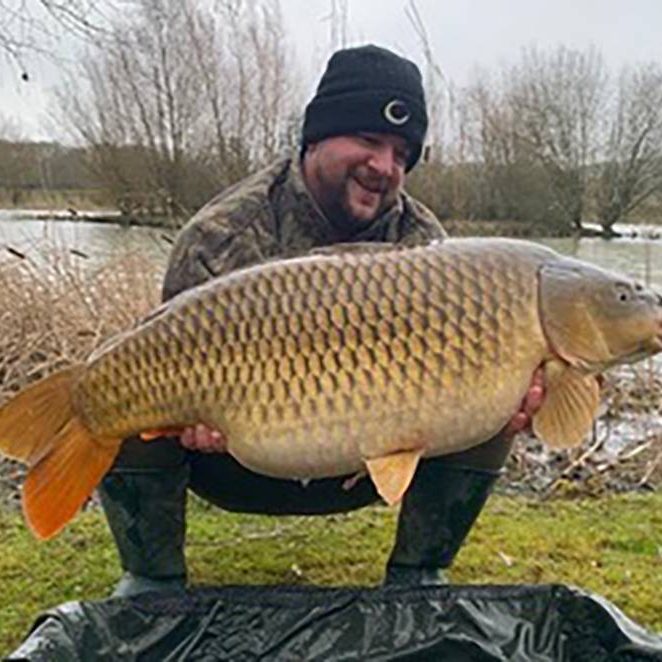 THIS WEEK’S FISHING! (in brief)
Temple regular Matt White is having a memorable winter on the lake, having just landed two common carp for almost 63 lb.
Having caught the Double-Row Linear back in January at 40 lb 14 oz, Matt has now added one of the lake’s biggest common carp, at 34 lb 2 oz, and also had a 28 lb 12 oz mirror carp.
Also braving the high winds and rain on Temple was friend Andy Hall, who had a 23 lb 8 oz common, having got his winter underway back in November with The Parrot at 32 lb 14 oz along with two upper-‘twenties’.
The Old Lake bream are continuing to feed well, a 48 lb catch winning the fourth and final round of the Geoff Vallance league, which earned series winner Paul ‘Tommy’ Hiller £500.
And there are specimen tench to be caught, matchman Terry Petman landing his biggest ever one, estimated at between 8-10 lb, on a pleasure session.
Train-travelling Chris Dean added four more carp to his impressive tally, on Old Lake peg 2.
And Graham Collins and his grandson Archie had a successful visit to Temple, the 14-year-old keen carper landing two doubles to 15 lb.
There’s a welcome respite from the wind and rain forecast this week, with an all-together quieter week after a turbulent February, and the promise of double-figure temperatures for the weekend.
Monday should be largely dry and sunny after overnight rain, and have a high of 8 degrees C, falling to 2 overnight under the clear skies ahead of a sunny start to Tuesday, with cloud gathering from mid-morning but staying dry with a high of 8, but down to 1 overnight into a similar dry day on Wednesday of 8, and 1 again overnight despite some showers and a damp Thursday morning, but drying up for the afternoon and a high of 7, with 2 overnight into a largely dry and sunny Friday of 8, with 3 overnight into a dry but cloudy day of 11 on Saturday, staying at 6 overnight into a Sunday of 10, falling to 2 overnight into Monday week. But then the Full Moon on that day should bring a change from cold nights to mild ones from Wednesday week, and double-figure daytime values as the week goes on and the weather warms up. Winds should start as light-to-moderate north-westerlies on Monday, becoming westerlies on Tuesday and Wednesday, then more northerly on Thursday but no stronger, though strengthening a little on Friday and becoming westerly again, and similar on Saturday and Sunday, becoming moderate again on Monday week. So, a break from the south-westerlies that have been bringing all the rain recently, until next weekend, but the price is some cold nights, though becoming milder just in time for the weekend, with winds just a touch stronger and from a more fishy direction by then.

The Old Lake’s bream have continued to feed, right the way through all the wild wind and rain that has made February 2020 the wettest on record.
The final round of the Geoff Vallance league produced a 48 lb winning weight for Luke Sherriff, who used a mixture of pole and bomb for his catch.
Runner-up was Tony Morris on 30 lb, ahead of Paul ‘Tommy’ Hiller on 28 lb 4 oz, and Geoff Vallance with 28 lb 2 oz.
‘Tommy’ won the series, collecting £500, ahead of Geoff Vallance and Fabian Arpad.
Matchman Terry Petman, from Merstham, caught his biggest ever tench, estimated at 8-10 lb, during a pleasure session at peg 36, along with eight sizeable bream for around 40 lb, on pole or feeder.
All of his fish fell to a Browning Window feeder and double maggot on a size 18 hook.
Chris Dean, from Eltham, was back for more despite the bad weather, and he had four carp to 15 lb, all on 15 mm CC Moore Pacific Tuna boilies, from peg 2.
There is just a couple of weeks to go before the end of the predator season, providing the chance to catch a zander or pike at its biggest weight and maybe tempt a personal best.
Josh Etherington had an 11 lb 4 oz pike while fishing the Long Bank with smelt sections.
He sent us a photo, as did the organisers of the recent Stoney & Friends Predator Day, who took a picture of a 23 lb 8 oz common carp caught by one of those taking part.

Matt White has started 2020 in style, this week adding one of Temple’s largest commons, at 34 lb 2 oz, and a mirror carp of 28 lb 12 oz, to go with his capture of the Double-Row Linear in January at 40 lb 14 oz.
The big common came on Tuesday at peg 15, to a stick mix and critically balanced wafter, and then after losing a fish from the same spot to a hook pull the following day, he had the 28 lb 12 oz mirror right at the end of his session on Thursday morning, from peg 14.
Fishing on the lake at the same time was pal and fellow Temple regular Andy Hall, who braved Monday’s driving rain and winds to land a 23 lb 8 oz common from peg 1, on a single 12 mm pop-up cast to just off the point of the island.
Matt’s capture of the Double-Row Linear in January was with a 24 lb common, while Andy had fish of 29 lb 6 oz and 27 lb 10 oz just before the New Year, having started the winter with The Parrot at 32 lb 14 oz along with two upper-‘twenties’ back in November.
Also in action was another lake regular, Aaron Warner, who had a 26 lb 8 oz ghost carp from peg 13, and then a 22 lb common from peg 4, both on corn.
And Graham Collins accompanied his 14-year-old grandson Archie, and watched him catch a 14 lb 3 oz common and a lovely fully scaled of 15 lb.
Both fish fell to 15 mm Sticky Baits Manilla wafters, from peg 13.