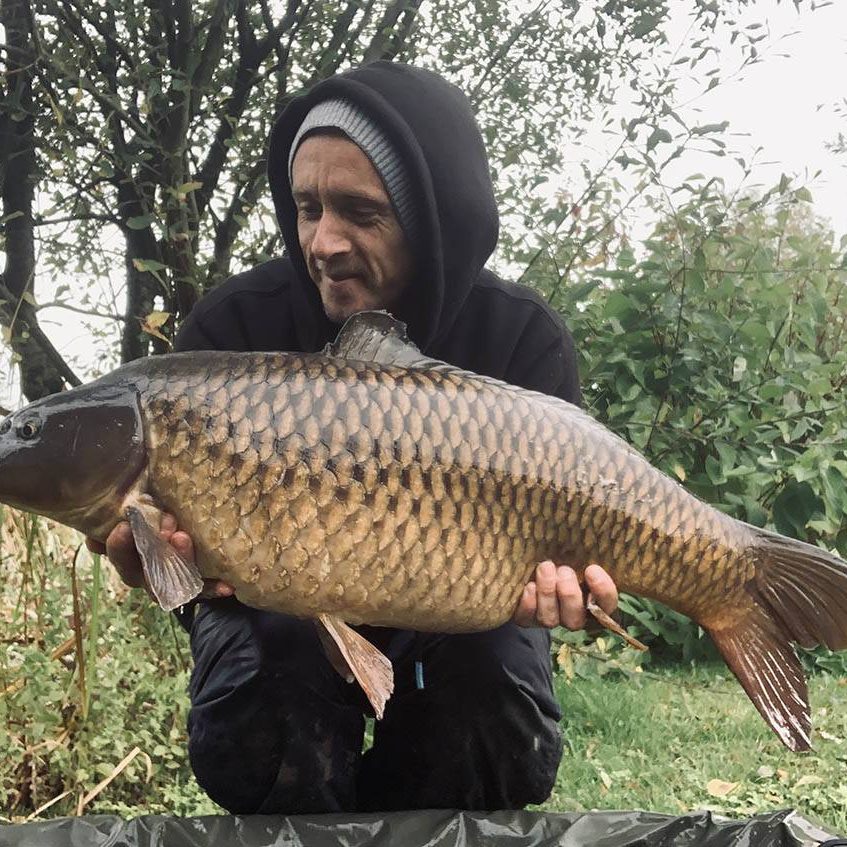 The fishery currently opens for day ticket fishing at around 7.00am on weekdays; 6.30am weekends and Bank Holidays. Current closing time is approximately 7.00pm.

THIS WEEK’S FISHING! (in brief)
This is a great time to take advantage of the bream sport that is available on the Old Lake, before the first frost slow down the action.
In last Sunday’s club match there was a 95 lb winning weight, followed by a 90 lb, both from the Front Bank, just a week after a 128 lb net won a charity match, from behind the island.
And a 70 lb pleasure catch included plenty of 5 lb fish, from the middle of the Long Bank, showing that no matter where you sit, you are more than likely to enjoy a busy day of action and sizeable fish one after another.
Temple Lake continues to produce carp, lake regular Andy Hall landing two ‘twenties’, the biggest 27 lb 14 oz, and he came close to catching a third.
And on Bonds Lake the fish have been putting on weight steadily, to the extent that there are now a fair number of mid-doubles, one angler landing fish of 15 lb and 16 lb in what is traditionally a single-figure fish water with a sprinkling of low-doubles.
And this week is the first full week of the new predator season, when anglers target the Old Lake’s zander and pike for the first time since mid-March.
It looks like being a favourable week in prospect in terms of the weather, with sunshine and showers, getting drier and milder as the week progresses, an average high of 16 degrees C, moderate westerly or south-westerly winds, and overnight values staying in double figures, the overcast days being particularly favourable for zander. Monday should be the most overcast, with light rain likely for the afternoon and evening, and a high of 14, with 11 overnight into a much more sunny Tuesday of 16 with a short evening shower possible, then 10 overnight into a similar Wednesday of 15, with 10 again overnight into a similar Thursday of 16, but with 13 overnight into a dry and overcast Friday of 17, with 13 again overnight into an overcast but dry Saturday of 17 again, with the chance of a shower after dark, and 12 overnight into a Sunday of 15. Winds should start as lightish south-westerlies on Monday, becoming a bit more gusty in the evening, and similar on Tuesday but more westerly, lighter and from the same westerly direction on Wednesday, slightly stronger and still westerly on Thursday and a bit stronger still and south-westerly on Friday, a little lighter and still south-westerly on Saturday, falling light on Sunday for the Full Moon heralding a change away from overcast, showery days and mild nights to bright days and nights in single figures with the high pressure pattern, and winds no longer from the south west. So, some fishy weather this week, especially as it won’t be long before the first frosts bite, so make the most of the opportunity.

It is great to be able to sit down at almost any peg on the Old Lake and catch lots of sizeable bream, perhaps over 100 lb in a day.
But that’s what you can do at present, the latest club match, with Hackbridge AS, being won with 95 lb of them.
Paul Williamson used pole or bomb and pellets, at peg 13 to take the honours, ahead of John Everiss with 90 lb on PVA pellet ‘tea-bags’ and pellet hook baits, at peg 1.
Third was Gary Simmons with 76 lb from peg 3, ahead of Paul Taylor on 64 lb 10 oz at peg 11, and Andy Ryan in fifth with 63 lb 12 oz from peg 46, on pole and pellets, using 4 mm on the hook.
A pleasure session for the bream provided over 70 lb of fish, many of them 5 lb, for Rob Drasey, from Lingfield, fishing peg 36 on the Long Bank on Saturday in flat calm conditions with pole and pellets.
Among the carp catches, Stuart Liddle, from Reigate, had eight fish on a 24-hour session at peg 2 on Saturday, the biggest an 18 lb 3 oz common and an 18 lb mirror, five of his fish being commons, on single 16 mm Sticky Baits Manilla boilies, over spodded hemp and crushed boilies.
And Terry Lawrence, from Beckenham, had seven carp to 20 lb 2 oz in the Jungle, on 14 mm Premier Baits Peach Melba boilies.
An overnighter at peg 75 produced four carp to 21 lb for Barni Kocsis, on single 20 mm Scopex bottom baits alongside PVA bags of crushed freebies.

Even in a slower week there is still action to be had on Temple at this time of year, Andy Hall landing two ‘twenties’, the biggest a 27 lb 14 oz mirror.
Fishing in promising conditions, at peg 3, Andy then added a 25 lb 6 oz common after a move to peg 9, and also had another fish come off, all on 12 and 15 mm boilies in snowman presentations over big beds of bait, cast three-quarters of the way across in open water or to the far side pads.
Also in action was Aaron Warner, from Sutton, with three carp, a 24 lb common, a 22 lb fully scaled, and a 20 lb 8 oz common.
All of his fish fell to single Mainline Cell baits fished without any free offerings, at peg 12.
And Dale Burrows had a 20 lb 10 oz fully scaled, which fell for a DSTR Baits wafter at peg 11, cast to the edge of the island.

Sixteen-year-old Albert Kundrak was surprised at the size of the carp that he caught on Sunday, his biggest being a personal bests, at 16 lb 8 oz.
Albert was fishing peg 3 using a Method feeder and a snowman presentation with a 14 mm Scopex boilie tipped with buoyant fake corn.