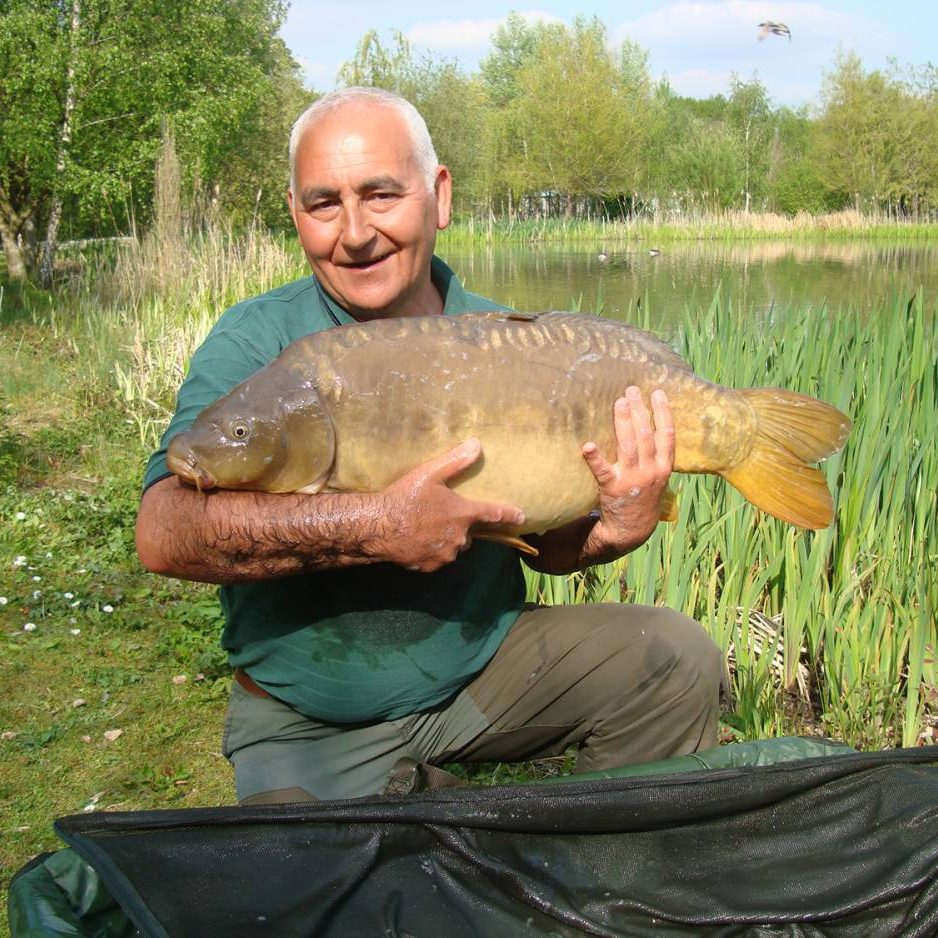 FISHERY OPENING TIMESThe fishery currently opens for day ticket fishing at around 7.00am on weekdays; 6.30am weekends and Bank Holidays. Current closing time is approximately 8.30pm.

THIS WEEK’S FISHING! (in brief)
Some huge catches have been made this week, showing just how well the fish are feeding, even when conditions are challenging.
Two Old Lake regulars braved wet and windy weather to land 26 carp for a total of 400 lb in one of their best sessions ever.
Kevin Oldcorn and Dave ‘Jonty’ Smith included two ‘twenties’ in their catch, most of which were landed in daylight.
Matchman John Everiss also achieved a three-figure weight, landing over 50 Old Lake bream using PVA mesh bags and pellets.
Fishery regular Paul Benefield landed 25 carp to 12 lb in a day on Bonds Lake, using banded pellets, fishing just a rod length out.
And Temple continues to produce the goods, this week adding a ‘thirty’ and three ‘twenties’ to this season’s tally, the biggest fish falling to Jose Garcia, while Mark Savage landed a brace of upper-‘twenties’.
It looks like a week of two halves ahead, with fairly calm and coolish weather and chilly nights to start the week, but a wet front moving through on Wednesday heralds stronger south-westerly winds and steadily improving temperatures. Monday is expected to be sunny in the morning and cloudy in the afternoon, but with a high of 12 degrees C, having been 5 overnight from Sunday, and falling to 6 overnight into a cloudy Tuesday and 13, but the cloud should keep values at 8 overnight into a wet and potentially stormy Wednesday of 13, with 7 overnight into sunshine and showers on Thursday and 13, with 5 overnight into a sunny Friday of 13, clouding over in the afternoon but staying at 7 overnight into sunshine and showers again on Saturday and 14, with 5 overnight into Sunday and 15. Winds should start as light north-westerlies, becoming south-easterlies on Tuesday, and stronger south-easterlies on Wednesday, but then changing to south-westerlies late in the afternoon, more north-westerly and still strong on Thursday, and then strongish south-westerlies on Friday, a little more westerly on Saturday but still strong, and lighter northerlies on Sunday. So, pleasant at the start of the week and then increasingly fishy with the rain-bearing winds from the west, rather than the east, from Wednesday, though still with single-figure temperatures at night.

Kevin Oldcorn and Dave ‘Jonty’ Smith ended their winter lay-off in style with a 26-carp catch weighing over 400 lb.
Kevin had commons of 23 lb 12 oz and 20 lb 3 oz, while Jonty landed a ghost mirror of 18 lb 10 oz and two other fish of over 18 lb.
The pair were fishing pegs 74 and 75 in stormy weather, casting 20 mm Mainline Peaches & Cream boilies to the island or in mid-channel, and all but four of the fish came in daylight.
Also in action with the carp was Zak Davies, from London, whose 25 lb 9 oz mirror and two upper-doubles fell for 18 mm Mainline Cell at peg 39.
Richard and Ben Lever, from Leatherhead, shared a catch of 13 fish to 18 lb, on 18 mm Kent Carp Baits red boilies over loose offerings at distance.
Adrian Wood had a successful 24-hour visit, landing six carp to 19 lb at peg 32, all of them doubles, on 15 mm Cell baits cast to the island or in open water, over loose offerings.
Sam Godwin, from Fetcham, landed commons of 20 lb, 18 lb and 15 lb from peg 5 on Friday, on 12 mm boilies.
And Adam Rogers, from Horley, had a 22 lb common and a 16 lb mirror from peg 30 on Saturday, on double 18 mm Cell over freebies.
Matchman John Everiss, from Mitcham, had a mega 50-plus bream haul of fish to 6 lb, from peg 18, on hair-rigged 8 mm Sonubaits S-Pellets with ‘teabags’ of pellets in PVA mesh, at distance.
And last week we reported that Chris Watt, from North Holmwood, had landed a 26 lb common carp on an overnighter in the middle of the Front Bank, casting into open water with a single 15 mm wafter over five spods of bait.
Chris has sent in a picture of the fish, which is his biggest from the Old Lake, and was on his first session back after two years away.

The run of big fish from Temple continued this week, with a 31 lb 9 oz mirror carp for Jose Garcia on a day session at peg 14 on Tuesday.
Jose favours home-made baits, and this fish fell to one of his own Tiger Nut and Maple boilies, a single offering with a PVA bag of six freebies and a scattering of a few loose baits.
Lake regular Mark Savage was in action once again, this time landing a brace of upper-‘twenties’ and losing a third fish.
Mark had mirrors of 27 lb 3 oz and 25 lb 8 oz on trimmed-down Pineapple pop-ups with a Liver stick mix.
And Dean Jackson landed a 26 lb 8 oz common at peg 9, at first light on Friday, on a 15 mm Mainline Chocolate Orange Fizz pop-up cast to the edge of the pads, over a handful of freebies, also adding a surprise 3 lb tench.

Paul Benefield returned to Bonds for another successful session, this time landing 25 carp to 12 lb.
Paul, from Leatherhead, who in past seasons has landed 45 Bonds carp in a day, as well as 36 Old Lake bream on another occasion, and 35 Milton Lake tench, used banded 8 mm pellets at peg 8, just a rod length out, under a small pellet waggler, fishing at dead depth and feeding 2 mm pellets.