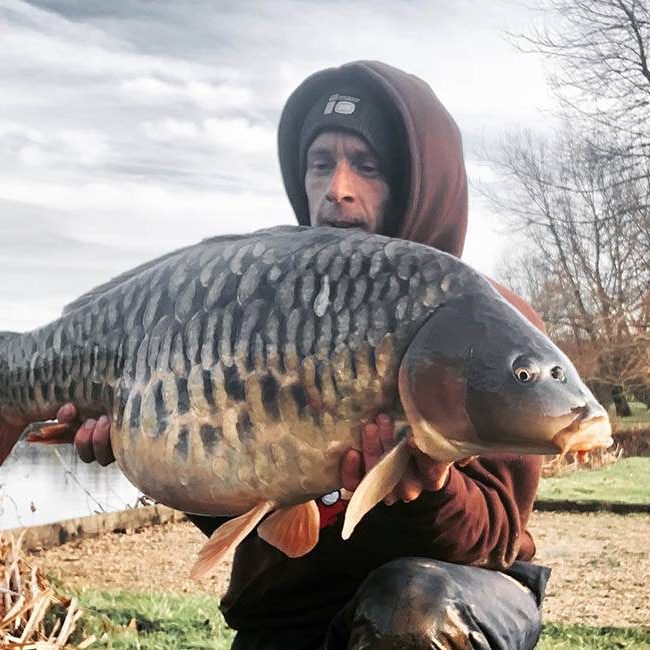 FISHERY OPENING TIMES
The fishery currently opens for day ticket fishing at around 7.00am on weekdays; 6.30am weekends and Bank Holidays. Current closing time is approximately 4.00pm.

THIS WEEK’S FISHING! (in brief)
Temple Lake has a 40 lb fish again, in the form of the Double-Row Linear, which has just come out at its biggest reported weight, 40 lb 14 oz.
Captor and lake regular Matt White has caught the fish before, at 37 lb 6 oz, in August 2018, but this capture marks a milestone for the water, as this is the first time that it has made 40 lb.
It is the lake’s third carp to reach over 40 lb, Nemo and The Ghost making that mark before it, and is showing a healthy growth rate, having been last reported nine months ago, in April, at 39 lb 6 oz to Dan Mayne, its then heaviest reported weight.
Also in action on Temple was Andy Hall, who added to his 27 lb 10 oz fully scaled just before Christmas with a 29 lb 6 oz mirror between Christmas and the New Year.
There are still numbers of bream being caught on the Old Lake, matchman Brian Nesbitt landing 40 lb during a pleasure session, on a Method feeder, while 25 lb won the Thursday contest, fished by 14.
And there are some mild temperatures for the time of year for this coming week, the average high being just over 10 degrees C.
The weather is following a pattern of alternating wet and dry days as fronts move through one after another, with 24-hour lulls in between.
Monday should be dry and overcast during daylight, with showers in the evening and a high of 8, with 5 overnight into a cloudy but dry Tuesday of 11, and staying at 10 overnight into an even milder Wednesday of 12 with rain in the late afternoon, with 9 overnight into a wetter Thursday of 11, and then falling 5 overnight by Friday morning due to clear skies for a dry and very sunny day of 8, with 5 overnight into a damp Saturday of 10, with 7 overnight into a sunny Sunday of 8, falling to 5 with the clear skies, but recovering to double figures on Monday, Tuesday and Wednesday week. Winds should start as moderate-to-strong south-westerlies on Monday and Tuesday, becoming lighter on Wednesday and more westerly, but then stronger again on Thursday and more south-westerly again, for a decent blow, then lighter and more westerly on Friday, and then stronger again on Saturday and south-westerly, and the same on Sunday, Monday and Tuesday week. So, fishy conditions forecast, due to some lively south-westerlies bringing damp, mild weather, lasting into the start of next week, ahead of some cooler nights by the weekend after this one.

The Old Lake’s bream fishing attracted plenty of interest during a busy few days between Christmas and New Year.
Brian Nesbitt, from Hastings, landing 40 lb of them on Method feeder, fishing on the Long Bank and finding that they came in spells throughout the day, on 6 mm pellets.
And the Thursday match was won with 25 lb of bream, 14 anglers taking part.
There are still places for next month’s Predator Day, on Saturday, February 15.
Tickets are £21, £16 for under-16s and OAPs, and all participants receive a Gold Label Tackle goodie bag that includes predator rigs.

The capture of the Double-Row Linear by Matt White at 40 lb 14 oz on Saturday means that Temple now has a 40 lb carp again.
Matt’s UK personal best was part of a two-fish catch, the other being a 24 lb common, on a three-day session.
The Ghost has previously also been caught at over 40 lb, coming out at 40 lb 10 oz in May 2017 to Terry Burns.
Nemo reached a top weight of 46 lb 4 oz in October 2018, the fishery record, before passing away last June.
A mirror carp caught last March at 37 lb 5 oz by Mark Savage could also be a contender for a ‘forty’ in the spring, being at the time just an ounce short of the weight that the Double-Row Linear was 18 months ago on the previous capture by Matt White.
Just before the New Year, Andy Hall continued his run of success, adding a 29 lb 6 oz mirror to the 27 lb 10 oz fully scaled that he caught just before Christmas.
Andy had his latest fish last Sunday morning, fishing peg 9 with a small wafter and small amounts of free offerings topped up regularly.
He had previously caught the same fish in the summer of 2018 at 26 lb 14 oz, giving a weight increase of 2 lb 8 oz in 18 months.