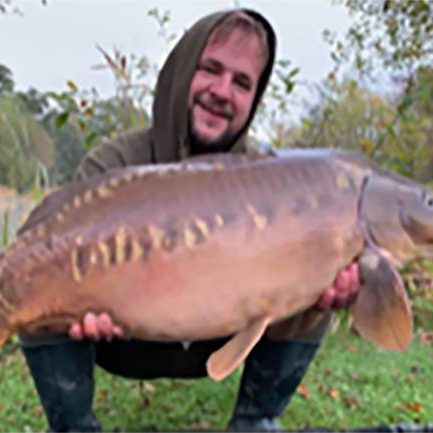 The fishery currently opens for day ticket fishing at around 7.00am on weekdays; 6.30am weekends and Bank Holidays. Current closing time is approximately 5.00pm.

THIS WEEK’S FISHING! (in brief)
The run of big fish continues on Temple, another three ‘thirties’ added this week to last week’s 33 lb 4 oz common for Joe Docherty.
This week Andy Hall continued his run of fish with the Parrot at 32 lb 14 oz, and two ‘upper-twenties’ commons on a 24-hour visit.
Bailiff Tony Sawyers provided another ‘thirty’, with his 31 lb 9 oz common, and another lake regular, Matt White, added a 30 lb 10 oz mirror, showing that the fish are still feeding.
Good numbers of carp are also being landed on the Old Lake, Sam Godwin catching ten commons in a 24-hour visit, the biggest 26 lb.
And Neil Vickers had nine to 19 lb on a 48-hour visit, including some bream, which are also still keen to pick up baits.
Despite stormy weather on Saturday, Alan Derbyshire still managed a few carp from Bonds, on Method feeder, and Joe Docherty has sent in a picture of his 33 lb 4 oz common and the 22 lb from the same session, both reported last week.
After the recent brief interlude of wet and windy weather, it looks like a return to colder but drier conditions this week, with some sunshine but highs in no more than single figures by day and bordering on a frost at night. Monday is likely to have the tail-end of the wet weather, and a high of 11, but with some sunshine in the morning, before a damp afternoon, holding up at 6 overnight into a drier but still damp Tuesday of 12, falling to 4 overnight into a dry and cloudy Wednesday of 8, with 5 overnight into a very sunny Thursday of 9, and 4 overnight into a fairly sunny and dry Friday of 9, falling to 3 overnight into a cloudy Saturday of 8, and 4 overnight into a Sunday of 7 and a chilly 2 overnight into Monday week. Winds should start the week as light-to-moderate south-westerlies on Monday, becoming more easterly in the afternoon, and then strongish northerlies by Tuesday, becoming light and more north-westerly on Wednesday, but moving round to south-westerlies for Thursday, becoming stronger, but easing to moderate for Friday and more westerly, stronger and south-westerly on Saturday and similar but westerly on Sunday, falling light again on Monday week. So, a changeable week, moving from wet and mild to cold and bright, and with very changeable wind directions, though with some sunshine to brighten things up, and becoming more dry as the week goes on, but the likelihood of swinging back to wet and windy with mild south-westerlies for the week after.

It seems to be a prime time for catching common carp, on Temple and on the Old Lake, as Sam Godwin, from Fetcham, showed with his catch of ten carp, all commons, on a 24-hour visit.
Sam was fishing peg 15 on Friday into Saturday and had fish of 26 lb and 20 lb in his catch, all on pairs of 10 mm Sticky Baits Manilla boilies cast into open water.
Also in action was Neil Vickers, from Worcester Park, fishing peg 2 for 48 hours, landing nine carp from 13 lb 8 oz to 19 lb, along with some bream, all on 15 mm Mainline Banoffee.

Following on from Joe Docherty’s 33 lb 4 oz PB common, there were three more ‘thirties’ reported this week, including the Parrot to Andy Hall at 32 lb 14 oz.
Andy was on a 24-hour visit and also had ‘the slate-grey common’ at 28 lb 8 oz and another common of 27 lb 2 oz.
He was fishing peg 3 and using pellets tipped with corn, getting his runs at 2am, 10am and 3pm, and the Parrot provided him with a new PB.
The last reported capture of the fish was in June, when it fell to Ross Genders at 31 lb 12 oz.
Bailiff Tony Sawyers added a ‘thirty’ to his tally with a 31 lb 9 oz common, from peg 11, on a 12 mm JHBaits Nuti-B pop-up over a few freebies and crushed pellets.
And Matt White also broke the 30 lb mark, his 30 lb 10 oz mirror being accompanied by a 17 lb fully scaled.
Matt fished peg 9, using CC Moore Live System boilies in the margins, getting the fish after a cold night.
Last week we reported that Joe Docherty had a PB 33 lb 4 oz common from peg 10, along with a 22 lb common, both on 12 mm Sticky Baits Manilla wafters over free offerings of hemp and corn. He has sent us pictures of his fish, which he caught with the help of a homemade bait-boat.

Alan Derbyshire braved stormy weather on Saturday to land five carp from peg 13, the biggest 9 lb, all on Method feeder with 8 mm pellets on the hook, cast tight to the island.