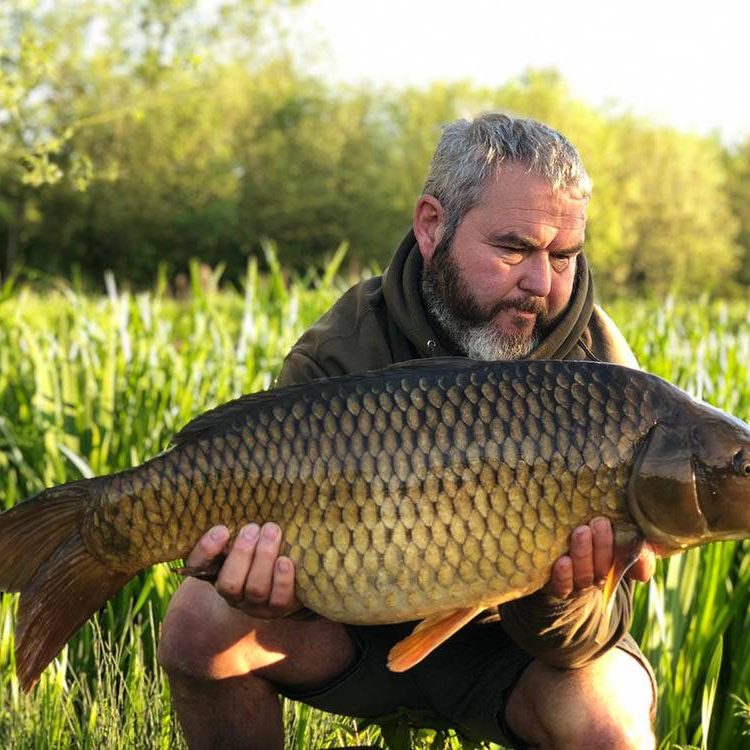 The fishery currently opens for day ticket fishing at around 7.00am on weekdays; 6.30am weekends and Bank Holidays. Current closing time is approximately 7.00pm.

THIS WEEK’S FISHING! (in brief)
The slow slide of temperatures now that autumn is here has sparked the annual late-September and October feeding spree among Temple’s carp.
Four ‘thirties’ in the past week, along with a fair sprinkling of ‘twenties’, shows that the fish have got an edge to their appetite.
Joe Holdsworth led the way with a brace of ‘thirties’ and two ‘twenties’ topped by Two Tone at 34 lb 8 oz.
And there were five fish to 31 lb 10 oz for bailiff Tony Sawyers during his 48-hour visit ending this weekend.
After last week’s pleasure catch of Old Lake bream of well over 100 lb, the charity match was won with 128 lb by Paul Gibson, fishing behind the island, the 44-strong contest raising over £900 for Children with Cancer.
There is plenty of carp action to be had on the Old Lake, one angler landing four carp to 21 lb on an overnighter.
Milton Lake produced a 32 lb winning weight of crucians and tench in the Priory Farm AC contest, Ian Farmer taking the honours, using pole and expander pellets.
And this Tuesday is the start of the predator season at Old Bury Hill, when anglers can target the Old Lake’s zander and pike for the first time for six and a half months.
For the first week or two the fish tend to be off their guard and eager to take a fish bait, having not seen one since March, so there is usually a flurry of action and maybe even a big fish, a fishery best of 17 lb 2 oz having been caught last November by Janusz Kansik.
It looks like being a slightly cooler and more changeable week in prospect, with an average high of 15 degrees C, and a dip in midweek to just 4 overnight, but with sunshine, as winds swing round to the north, but then the mild south-westerlies return with a dry and cloudy second half of the week of moderate winds. After Sunday’s mild high of 18 and gusty westerly winds, there is expected to be a much calmer day on Monday, with light winds and 16 degrees, but after a cool start of 10 in the morning followed by a wet afternoon. Then it should stay at 14 overnight into the wettest day of the week on Tuesday, with a high of 17, falling to 6 overnight as the skies clear, into a very sunny and dry Wednesday of 12, with just 4 overnight into a cloudier Thursday of 13, with 10 overnight into a cloudy Friday of 16, with 12 overnight into a cloudy Saturday of 17, with 11 overnight into a Sunday of 15. Winds should start as lightish westerlies on Monday, becoming south-westerly in the afternoon and slightly stronger and more westerly on Tuesday, becoming more northerly in the evening and light-to-moderate north-westerlies on Wednesday, becoming very light and changeable on Thursday, eventually turning into a moderate southerly on Friday, and a moderate south-westerly again by Saturday afternoon, and similar on Sunday. It looks like more sunshine and showers for the week after, with cooler night of single figures and mid-teen daytime highs. So, a mixed week of weather rather than a set pattern, with the steady drop in night-time temperatures into single figures the most noticeable change.

Bream sport on the Old Lake is at its prime now and until the first frosts take the temperature down a notch later in October.
A magnificent 128 lb won the Carp Shop, Horley, charity contest, despite the extra pressure of 44 top anglers fishing all around the lake.
Local angler Paul Gibson took the honours from peg 74, round the back of the island, fishing a feeder to the island.
He was well ahead of runner-up Dan Knight, from the Carp Shop, on 70 lb, from peg 3, with third going to John Swann, pegged next to the winner, on 73, and also fishing a feeder to the island, for 69 lb.
Fourth was former England man Steve Gardener with 59 lb from peg 66, on pole or feeder, and there were 45 lb weights from all around the lake.
The event raised an impressive £900-plus for chosen charity Children with Cancer.
In terms of carp catches, Croydon angler Koscis Barna had a successful overnight session with four carp to 21 lb, which was a mirror, from peg 74, using single 20 mm Scopex boilies and PVA bags of crushed baits soaked in Scopex Liquid.

Every year this time is a busy one for catches on Temple, right up until the first run of frosts at the end of October.
And it’s shaping up well with four ‘thirties’ reported in the past week, including a brace to Joe Holdsworth.
Joe landed Two Tone at 34 lb 8 oz (this time last year it weighed 32 lb 8 oz, to John Keatley) along with a 33 lb 12 oz mirror and a 28 lb 8 oz common and a 26 lb 4 oz mirror.
He was fishing peg 14 in midweek with 18 mm JH Baits pop-ups, and the same company’s baits did the business for bailiff Tony Sawyers.
Tony landed five fish during his 48-hour session, which he was finishing this weekend, the biggest 31 lb 10 oz, along with a 28 lb 6 oz common, a 25 lb 5 oz common, a 24 lb 7 oz mirror and a 23 lb 8 oz scaly mirror.
Successful bait was Nuti-B crushed up and scattered in the area, fishing a single 12 mm pop-up over the top.
And Andy Hall, from Cranleigh, had never had a Bury Hill ‘thirty’ until this week, when an overnighter produced a mirror of 30 lb 4 oz for him, on a 12 mm Mainline Cell pop-up.

The Priory Farm club contest produced plenty of action, the top weight being 32 lb for Ian Farmer, on pole and 3 mm expander pellets, from peg 2.
Dominic Synic was second with 30 lb 4 oz of mainly tench on Method feeder and pellets, from peg 22.
Equal third were Steve Parkin with 26 lb 12 oz from peg 21, along with of Terry Petman on the same, on pole and pellets at peg 1.
Organiser Ray Smee was fifth with 24 lb on pole at peg 3, including roach to 1 lb 8 oz on worms.