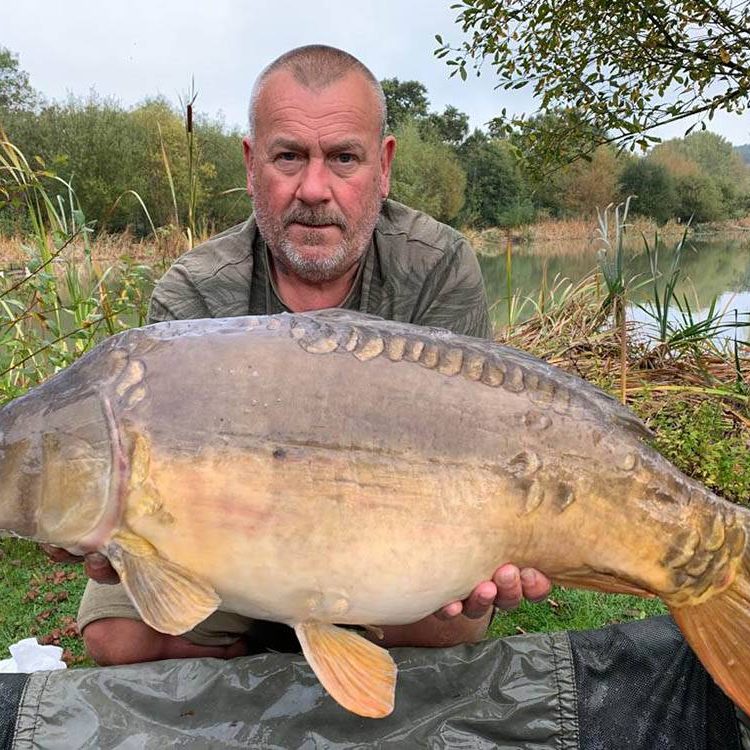 The fishery currently opens for day ticket fishing at around 7.00am on weekdays; 6.30am weekends and Bank Holidays. Current closing time is approximately 5.00pm.

THIS WEEK’S FISHING! (in brief)
Temple Lake provided a welcome ‘thirty’ in the form of a 33 lb 4 oz common, to show that the fish are still active and feeding, and captor Joe Docherty added a 22 lb fish for good measure.
The Old Lake carp are catchable in numbers, Elliot Hunter landing four to 18 lb on an overnighter on the Front Bank.
There are good numbers of zander still being caught, Adam Rogers managing five fish to 5 lb on his visit, and a carp, and fishing a rod with boilies gave him a second one.
And Mick Warren has sent in a picture of his 28 lb 4 oz Temple mirror carp, reported last week, as has Andy Hall with his 27 lb 14 oz fish from his previous visit.
It looks like a fairly dry and calm week to come, split into two halves, with bright days and cool nights at the start, as easterly winds keep high pressure in charge, and then the winds should move round to the west and become moderate, bringing a few showers early and late in the day, but nothing too heavy. Monday should have lots of sunshine, but a high of 10 degrees C, after an overnight low of 3 from Sunday, and then 4 overnight into an equally sunny Tuesday of 11, with 4 again overnight into a more overcast Wednesday of 10, as the change begins to happen, with 6 overnight with light showers likely into an overcast Thursday of 12, leading into 10 degrees overnight with showers into an overcast Friday of 13, and 9 overnight into an overcast Saturday of 12, with eight overnight into a Sunday of 10. Winds should start the week as light north-easterlies, a little stronger on Tuesday but more easterly, increasing a touch to moderate on Wednesday and still easterly, a bit lighter and south-easterly on Thursday, a bit stronger and south-westerly on Friday, and the same and more westerly on Saturday, and a bit stronger on Sunday. So, a nice amount of warm sunshine to start the week and then some fishy, overcast conditions later in the week with a more favourable wind to get fish feeding, without too much in the way of rain or any really big winds. The week after could have some even cooler nights, so the mild nights of this coming weekend offer a short window of opportunity.

Although the nights are getting cooler, it takes a while for the water temperature to drop, due to the heat built up over the summer, so the Old Lake’s carp are still keen to feed in numbers.
Elliot Hunter, from Aldershot, took full advantage during an overnighter on peg 16, landing four carp to 18 lb, which was a common.
He used 15 mm Mainline Cell boilies over a sprinkling of free offerings, and his biggest fish was a new personal best.
Predator angler Adam Rogers, from Horley, got among the zander, landing five, the biggest 5 lb, on small chunks of bream and smelt.
And he also had a carp on a fish bait, so he put out a rod with a boilie and had a second bonus carp, the two fish weighing 12 lb and 14 lb.

The capture of a ‘thirty’ is always a boost to Temple regulars, showing that the fish are still active and feeding, and Joe Docherty proved what when he landed a big common carp and added a ‘twenty’ in the same visit.
Joe, from Guildford, was fishing peg 10 when he landed the 33 lb 4 oz personal best common and a 22 lb fish, both on 12 mm Sticky Baits Manilla wafters over free offerings of hemp and corn.
Last week we reported how Mick Warren had landed a 28 lb 4 oz mirror, and he has sent us a picture of the fish.
Mick, from Carshalton, was fishing peg 9 with Mainline Cell in a snowman presentation over a few freebies, and had the run at first light on a 24-hour session.
And Andy Hall has sent us a picture of the 27 lb 14 oz mirror that he caught on his previous visit, and the 22 lb common from his latest session, fishing peg 3 with 12 mm wafters over big beds of 12 and 15 mm baits, also landing a 25 lb 8 oz mirror, pictured last week.