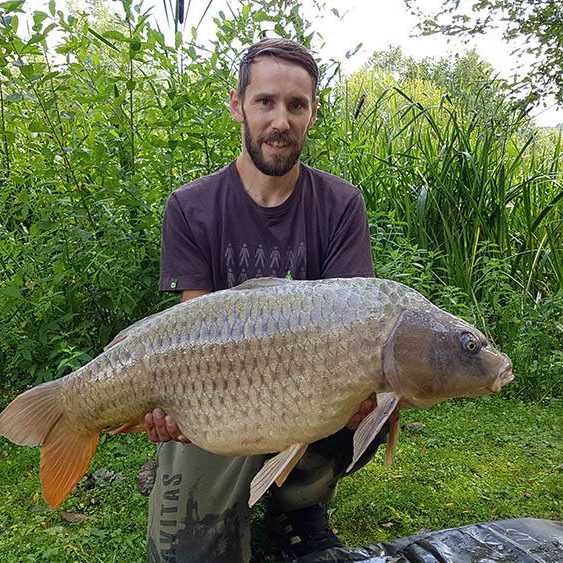 The fishery currently opens for day ticket fishing at around 7.00am on weekdays; 6.30am weekends and Bank Holidays. Current closing time is approximately 8.30pm.

THIS WEEK’S FISHING! (in brief)
Temple Lake’s most distinctive fish has been landed, at a weight of 33 lb 14 oz.
The Ghost was caught by Michael Oliver, who made a last-minute change of plans from fishing the Old Lake to try Temple.
Even then, it took until half an hour before leaving time on his 48-hour session before his fortunes changed and he banked one of the lake’s most sought-after specimens.
The reason for the switch was that a good few anglers were already set up on the Old Lake, and among their catches was a total of 29 fish for Richard Urquhart with his son Charlie and friend Paul Downey.
And the Old Lake has also been producing specimens of other species, carp angler Ian Featherstone landing a 15 lb 8 oz pike while retrieving his boilie, and another angler, Josh, including a 9 lb bream in his carp session, on a pop-up.
After the moderate temperatures of most of August, summer came back with a blast at the weekend, pushing the thermometer to 30 degrees C. And there is similar heat expected for Bank Holiday Monday and Tuesday, before a steady cooling as the week progresses. Holiday Monday is expected to reach a high of 29, and be blue skies and sunshine, staying at a warm 15 overnight, with a similar temperature on Tuesday, but with a little more cloud in the evening and 17 overnight into Wednesday, which should reach 24, with a bit more cloud, then 15 overnight into a sunny but cooler Thursday of 21, with 12 overnight into a more cloudy Friday of 20, staying at 14 overnight due to the cloud, with a sunny 21 on Saturday, and 13 overnight into a Sunday of 20, with a cool 11 overnight into 20 again on Monday week. Winds should start the week as very light south-easterlies, a little stronger on Tuesday, then moderate on Wednesday as they swing round to the south-west, a little stronger again on Thursday and more westerly, similar on Friday and Saturday but more from the south west, and more northerly on Sunday and Monday week, still moderate in strength. So, a dry and sunny week, but with a gradual cooling to more normal temperatures as south-westerly winds and cloudy weather begin to take control and encourage the fish to feed.

Good numbers of carp continued to be caught prior to the spike in temperatures, a trio of anglers sharing a 48-hour session banking 29 fish.
Lake regular Richard Urquhart and his son Charlie and friend Paul Downey were fishing pegs 34, 35 and 36 from Friday to Sunday, and casting into open water in wet weather with TNT Steamies baits, for a “great session and stunning fish, as always.”
Chris Stratford, from Bromley, was kept busy with a catch of 19 carp to 15 lb while fishing from peg 2, ten of his fish being commons, and a much bigger fish coming off.
His pal Josh from Horley landed six bream to a specimen weight of 9 lb and a 24 lb 2 oz common, on 18 mm CC Moore pop-ups tipped with buoyant corn, and both anglers found single baits with no freebies to work best.
Another lake regular, Stephen Spear, was also in action, landing 17 carp in a 36-hour visit, the biggest a 17 lb common.
Crawley angler Stephen landed 11 of his fish on Mainline baits and six on Bloodworm boilies, using PVA bags cast into open water with Ronnie rigs.
Ian Featherstone, from Epsom, landed six carp to 19 lb, which was a common, during his 24-hour visit on Tuesday, on peg 17, casting into open water and to the island, and also had a 15 lb 8 oz pike while retrieving a NashBait Strawberry Crush boilie.
And David Grant landed two carp, the biggest 20 lb, fishing for two hours on Thursday evening at peg 29, on Carp Company Icelandic Red with Caviar & Cranberry boilies.

The first reported capture of The Ghost for almost two months came after most anglers had left and the lake was quiet on a Monday afternoon.
Captor Michael Oliver had planned to do 48 hours on the Old Lake, starting on Saturday afternoon, but the number of night anglers already installed made him change his mind and opt for quieter Temple.
He and a friend started in pegs 5 and 6, but after 24 hours and no sightings of fish, when other anglers left they moved to pegs 14 and 15, Michael on 15, targeting the margins and the island.
But when that didn’t produce any action, Michael moved one bait, a “nutty shelf-life boilie”, into open water with a few loose offerings, and with 30 minutes remaining and all but the last few bits of gear packed away, Michael got a run on that rod and landed The Ghost, at 33 lb 14 oz.
“I was over the moon with the end result, on what was a tricky weekend’s fishing,” he said.
This capture of The Ghost is the first reported since late-June, when it fell to Martin Plank at 35 lb 10 oz.
It was banked exactly a year ago this week by Jon Botting, at a weight of 34 lb 4 oz.
Ashtead angler Michael has had success at Temple in previous seasons, having banked Friar Tuck at 37 lb 2 oz back in June 2013.

The carp are catchable in good numbers, with temperatures at full summer level, on feeder or straight lead to the island margins or in open water on a pellet waggler, or down the edge on a pole later on.
And there are also roach and perch to be caught on pole or waggler, when the carp let you keep a bait in the water.