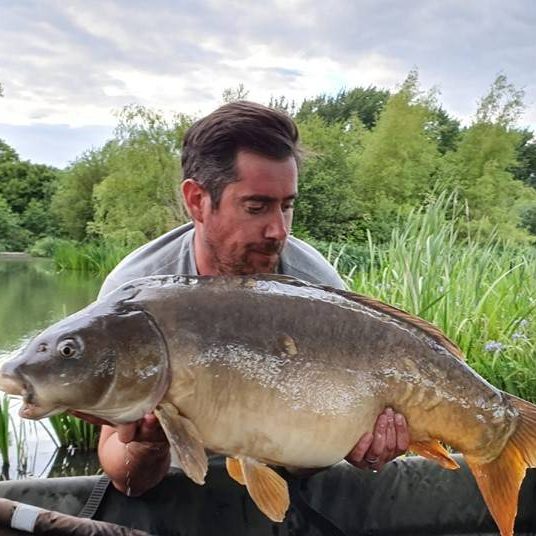 THIS WEEK’S FISHING! (in brief)
Temple Lake is enjoying a return to form with a trio of ‘thirties’ reported this week, along with numerous ‘twenties’.
And it was an angler on his first visit to the lake who landed the biggest, Ross Genders banking The Parrot at 31 lb 12 oz, while Graham Collins had a 31 lb 9 oz common, and Ray Harding a 31 lb 8 oz mirror.
There was also a 28 lb mirror for David McCallum, in a brace of ‘twenties’, along with a fair sprinkling of others of over 20 lb.
After a brief lull at the start of this month, the latest captures mean that Temple has now produced 30 lb-plus carp for eight out of the past nine weeks.
While a newcomer to Temple was leading the way in the carp catches, a junior angler was showing the seniors how it is done in the latest Faulkner’s AS match on the Old Lake.
His 66 lb 12 oz catch was well ahead of the nearest adult in the contest, which was fished on pegs 1-40.
And multiple catches of carp are now a regular feature of fishing on the Old Lake, brothers Graham and Tony Vary sharing a catch of 19 fish to 18 lb in a 48-hour visit, while Paul Downey had 13 to 19 lb 8 oz, along with six bream and two tench.
Now that summer has arrived, there is a steady warming of the weather being forecast this week, which could take temperatures over 30 degrees C by the weekend, with lots of sunshine. Monday is expected to be overcast with the chance of a shower mid-morning, but 22 degrees, and 17 overnight into a brighter Tuesday of 24 after overnight rain, with 16 overnight into a sunnier Wednesday of 25, with 15 overnight into all-day sunshine and blue skies on Thursday with 23, and 15 overnight into the same conditions on Friday as the heat builds, reaching 27, with 18 overnight into another very sunny day on Saturday that could make 30, with 15 overnight into a Sunday of 27. Winds are expected to have an easterly influence for much of the week, starting light but gaining strength in midweek, becoming lighter again towards the weekend. Monday should bring light south-easterlies, moving round to the west during the day and becoming north-westerlies on Tuesday but still light, becoming stronger and more north-easterly on Wednesday, and stronger still and more easterly on Thursday, becoming more moderate on Friday but still easterly, and lighter still on Saturday, swinging round from easterlies in the morning to south-westerlies by the evening, and staying in the west for Sunday and Monday week. So, a taste of summer’s heat to come, with a bit of a strong midweek blow ahead of when the high pressure descends.

With hopefully the worst of the storms and spawning behind us, sport seems to be settling into a productive pattern on the Old Lake, providing plenty of action from the carp, and bonus bream and tench along the way.
Brothers Graham and Tony Vary, from Ickenham, shared a 48-hour session at pegs 30 and 31, Tony landing 14 carp to 18 lb and Graham five to the same size, all mid-doubles, on 16 mm Sticky Baits Manilla boilies tipped with 12 mm pop-ups, over free offerings.
Paul Downey, from Banstead, had 13 carp to 19 lb 8 oz, all of them commons, from peg 22, along with six bream and two tench, on single 18 mm wafters over a scattering of baits.
Nick Ridge had two carp on an overnighter, the biggest a 22 lb common, on 18 mm Solar boilies, also landing a surprise 4 lb zander.
And Simon Zammit and Mark Easton shared a nine-carp catch, Simon landing four and Mark five, the biggest 18 lb and 19 lb, from pegs 34 and 36, casting three-quarters of the way across to the island with 20 mm Mainline Peaches & Cream boilies.
Junior angler Eddie beat the adults at their own game when he won the Faulkner’s AS contest with 66 lb 12 oz of bream, from peg 37.
He was a couple of fish ahead of Steve Turner, who had 58 lb 12 oz from peg 1, ahead of Lee Perry on 55 lb 12 oz from peg 35, and John Tregitt with 49 lb 3 oz.
In the Friday contest, Dave Johnson came out top with 76 lb 8 oz from peg 14 on pole and expander pellets, ahead of Keith Hogg with 62 lb 8 oz from peg 18 on pole and corn.
Simon Watford was third from peg 1 with 60 lb on pole and dead maggots, and there were nine weights out of the 12 who finished on over 40 lb.

Temple has been racking up the ‘thirties’, adding another three to the tally this week, the biggest reported falling to an angler on his first visit to the lake.
Ross Genders had a memorable introduction when he landed The Parrot at 31 lb 12 oz, and there was a 31 lb 9 oz common for Graham Collins, fishing peg 13 with a boilie tipped with corn cast close to the edge.
Also landing a ‘thirty’ was Ray Harding, his 31 lb 8 oz mirror adding to his 24 lb 14 oz common reported last week, and also a 20 lb 4 oz common.
Ray was on a four-day session, using 15 mm Sticky Baits Manilla bottom baits with 12 mm Mainline Cell pop-ups over a scattering of freebies close to the island.
David McCallum was also on his first trip to Temple, and he was “well happy” with mirror carp of 28 lb and 24 lb 8 oz, along with a 19 lb 4 oz fish, from peg 2.
Bailiff Tony Sawyers had a mirror of 26 lb and commons of 23 lb 2 oz and 17 lb 8 oz from peg 11, in strong winds and heavy rain, baiting with crushed boilies and hemp.
Luke Luff landed a 26 lb common from peg 4, and Andy Hall had a “mint common” of 18 lb from peg 15 on Sunday afternoon, fishing in the left-hand margin.
And last week we reported how Barry Godfrey, from Morden, landed a 29 lb common from peg 10 on his birthday, casting a Cell boilie tight to the brick ‘monk’ overflow. He has sent us a picture of his fish.