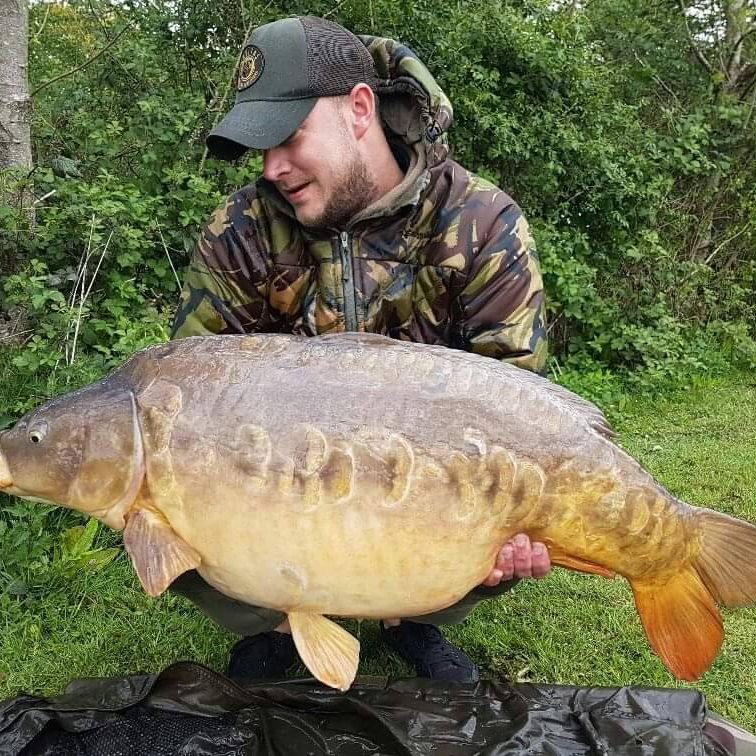 FISHERY OPENING TIMES
The fishery currently opens for day ticket fishing at around 7.00am on weekdays; 6.30am weekends and Bank Holidays. Current closing time is approximately 8.00pm.

THIS WEEK’S FISHING! (in brief)
Bury Hill’s biggest fish has paid another visit to the bank, just two weeks after its first capture of the year, and at just 7 oz less than last time.
For lake regular Jon Botting, it completed his tally of Temple’s most prized residents, though there are still some of the lake’s big common carp that he wants to catch.
Nemo’s latest capture, at 45 lb 1 oz, came amid a flurry of big fish banked following the mini-heatwave over the Easter weekend, which seems to have triggered the fish into feeding, though temperatures have slipped since then.
The fishery’s other lakes have also benefited from the warm spell, Bonds Lake making a 21st birthday present of a day’s fishing memorable for Isabella Hopp, when she caught 21 fish with her father, Josef.
The Milton Lake crucians are also responding well, Glen Celisse landing 34 on his visit, the biggest over 2 lb 8 oz, on pole and maggots.
And a week-long stay on the Old Lake provided Richard Urquhart and Paul Downey with 59 carp to low-‘twenties’, showing that fish are now feeding in numbers.
After Storm Hannah last week, it looks like a largely dry and calm week ahead, albeit with only average temperatures and an on/off easterly wind at times. Monday should be slightly warmer than the weekend, at 15 degrees C, and with some sunshine, but after 4 degrees overnight from Sunday, there’s the same again overnight into Tuesday as high pressure moves in. Tuesday is likely to be sunnier and warmer still, at 16, with 7 overnight into a cloudier Wednesday of 14 with the chance of a light shower in the evening, then 7 again into Thursday of mixed sunshine and cloud with a chance of a lunchtime shower and 14, 7 again overnight into Friday and more sunshine and cloud with a short shower and 13, falling to 4 overnight into Saturday and 13, with a sunny morning and cloudy afternoon, and 5 overnight into Sunday, and a cloudy 14, but a cool night of 4 into Monday week. Winds should start as light north-easterlies on Monday with the high pressure, becoming more easterly during the day and into Tuesday, more westerly but still light on Wednesday, strengthening overnight into Thursday and Friday, becoming more northerly and still strongish, but turning round more to the east on Saturday and falling light on Sunday but still easterly, strengthening on Monday week. So, a mixed bag of a week, with sunshine, cloud and a few showers, and winds switching around in direction and varying from light to gusty, with no settled pattern to the weather.

The boost in water temperature caused by the very warm Easter weekend has sharpened appetites among the Old Lake’s residents.
Richard Urquhart and Paul Downey had a successful week on pegs 2 and 3, landing 59 carp to low-20s, on 15 mm Steamies TNT (Tigernut & Toffee) baits.
Kevin Hunter and Graham Roberts shared a catch of 26 carp, the biggest for Kevin being a 24 lb mirror, while Graham had a 21 lb common.
Their fish fell to Sticky Baits Manilla and The Krill offerings for Kevin, and Mainline Cell and Liver for Graham, casting towards the island from pegs 32 and 33 and in open water.
Karl Napoli, from Redhill, had eight carp to 19 lb 2 oz on an overnighter at peg 32, on 16 mm double Cell boilies.
Lake regular Janusz Kansik had a 48-hour session with his father and they landed seven carp to 17 lb and two tench, along with bream.
Neil and Jo Budd, from Cheam, came back for some more action and landed three carp, including a 25 lb 15 oz mirror and an 11 lb 10 oz ghostie.
They were using 20 mm Mainline Essential I.B. boilies topped with the same in 15 mm pop-ups, over chopped freebies, casting to the island from pegs 35 and 37.
And Chris Watt, from North Holmwood, landed a 26 lb common on an overnighter in the middle of the Front Bank, casting into open water with a single 15 mm wafter over five spods of bait.

Sport on Temple Lake usually hits top gear towards the end of April, and so it proved again this year, as Nemo visited the bank for the second time in three weeks, along with a good number of other fish.
Jon Botting got the fish that he was after to complete his clean sweep of the lake’s biggest and most famous residents in 20 months, and this one was the heaviest weight of all of them, at 45 lb 1 oz.
Jon, from Horsham, was fishing peg 10 with single 14 mm A2 Baits Creamy Toffee offerings, and had the run from the right-hand margin, after putting in plenty of bait.
It was the fish that Jon most wanted, having landed the Double-Row Linear at 36 lb 1 oz in August 2017, Two Tone at 36 lb 2 oz in May last year, Friar Tuck the week after at 31 lb 4 oz, then the Parrot at 31 lb 4 oz in July, and the Ghost last August at 34 lb 4 oz.
There are other reports coming through from Temple of six fish being landed, including carp of 30 lb, 29 lb and 20 lb to one angler, and a 26 lb common to another. Details will follow as soon as they are received.

Isabella Hopp, from Banstead, celebrated her 21st birthday in style with a 21-carp catch of fish to 12 lb 11 oz, along with a tench.
Enjoying a birthday gift from her dad, Josef, she fished a pellet feeder filled with 2 mm sticky pellets and 8 mm pellets on the hook.
And Alan Derbyshire tried Bonds for a change and landed ten carp from peg 8, the biggest 7 lb, on a Hybrid feeder and 8 mm pellets on the hook, in open water.

Glen Celisse, from Greenwich, had a bumper session, landing 34 crucians to over 2 lb 8 oz and two tench, along with three small carp.
He fished a 9-metre pole with double red maggot, feeding red maggots and occasional golf ball-sized balls of groundbait.