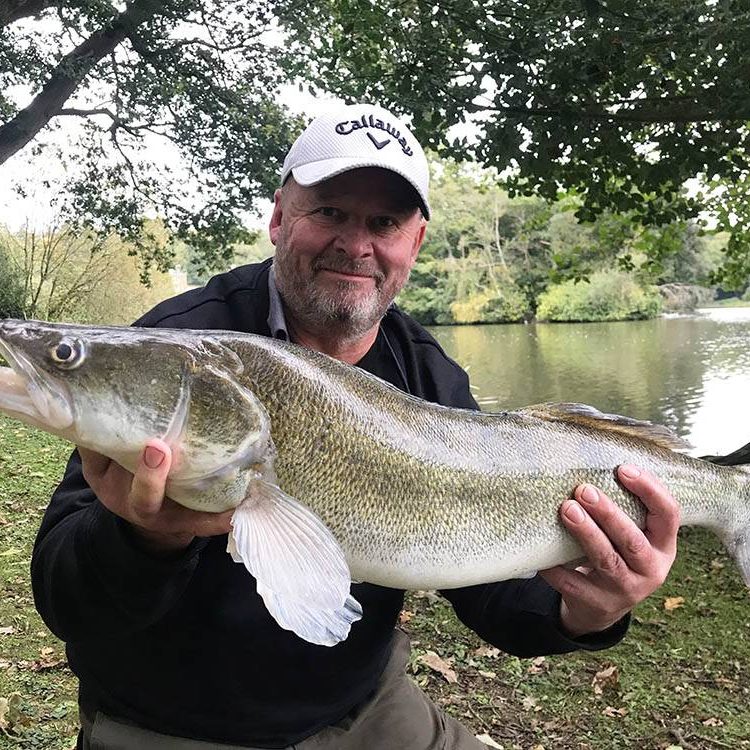 The fishery currently opens for day ticket fishing at around 7.00am on weekdays; 6.30am weekends and Bank Holidays. Current closing time is approximately 6.30pm.

THIS WEEK’S FISHING! (in brief)
It’s all action on the Old Lake for zander at present, anglers enjoying up to 40 runs in a day, shared by the captor of last week’s 9 lb 14 oz fish.
Pete Williamson fishing with a friend on the Front Bank had the big hit of runs, though there was an even bigger zed than his landed in the midweek match by anglers fishing for bream, at 10 lb 12 oz, weighed on the match scales, along with a 6 lb 2 oz tench.
That contest was won with 61 lb of bream on Method feeder and wafters, from behind the island, and carp anglers found the Old Lake’s carp willing to feed in numbers as well, with a catch of 19 to 19 lb for Colin Kost and Andrew Kettle on a 48-hour visit from the North and Midlands.
Bonds Lake is also in great form for numbers of carp at the moment, Charlie Watts having several successful visits, the best day producing 23 carp to 10 lb.
And on Temple there was a sprinkling of ‘twenties’, Mick Warren landing the biggest reported, at 28 lb 6 oz, while Andrew Hall had a brace to 25 lb 8 oz.
Duncan Charman has sent some pictures in of his clients’ catches, reported last week, which included zander to 10 lb 1 oz, double-figure pike and 15 good carp, all on sections of deadbaits.
It’s looking like a largely dry and calm week, with some spells of sunshine, though temperatures are falling around a degree each week now, to an average high of 14 degrees C by day and single figures at night, down to 7 for a couple of occasions this week as high pressure dominates. Monday looks likely to be overcast with a short shower in the morning and a high of 13, with sunshine in the late-afternoon, but falling to 7 overnight into a sunnier Tuesday of 13, but with 7 again overnight into a cloudy Wednesday of 13, the cloud keeping the night-time values at no lower than 10, with 14 on Thursday and the chance of an early shower before an overcast but dry day, with 9 overnight into a dry but overcast Friday of 15, with 12 overnight into similar on Saturday and 15 again, with 9 again overnight in a Sunday of 15 again, though warming up by a degree each day after that, as a low heads in from the south west, bringing a change to milder, wetter and windier weather. Winds this week should start as moderate north-westerlies on Monday, becoming light and more westerly on Tuesday, swinging round to the east on Wednesday but still very light, more westerly on Thursday but still light, a bit stronger on Friday and more southerly, and similar on Saturday and Sunday. So, plenty of overcast weather to make fish feed more confidently, especially zander, and pleasant to be outdoors, with lightish winds and a bit of sunshine without much rain, but the cool nights might slow sport in the mornings, making the afternoons the prime feeding time.

There are so many zander being caught on the Old Lake that even the match anglers are getting in on the act, landing a 10 lb 12 oz fish while after bream.
Captor of last week’s 9 lb 14 oz zed, Pete Williamson, shared 40 zander runs with a friend, landing 12 fish each, up to 6 lb.
And in addition to the nine zander to 10 lb 1 oz that angling guide Duncan Charman’s clients, Ian and Paul, from Essex, landed, along with three carp to 16 lb, all on fish sections, reported last week, he had another big catch with two other clients.
Lee and Gary from West Sussex had never caught zander before, but with his help and in poor weather they landed nine zander on hair-rigged fish sections, to just under 6 lb, and no fewer than 12 carp to just under 20 lb, and a bream, all on fish baits.
Famous name angler Graeme Pullen visited to do some filming for his internet channel Totally Awesome Fishing, and landed zander to 6 lb along with double-figure carp, on freelined whole small roach.
Biggest reported zander of the week was the 10 lb 12 oz one landed from peg 6 in the bream match, which was won with 61 lb 4 oz by Mark Hathway.
Mark drew peg 74, at the back of the island, and used a Method feeder and wafters to finish ahead of John Swann, who had 56 lb on Method feeder at peg 72.
Third was Terry Harrison with 48 lb on Method feeder from peg 14, with Keith Hogg fourth with 46 lb 8 oz from peg 75 on cage feeder.
Paul Taylor landed a 6 lb 2 oz tench on pole at peg 4.
Among the carp catches, visitors from the North and Midlands Colin Kost and Andrew Kettle shared a 48-hour session, and in the often-wet conditions landed 19 carp to 19 lb.
They were on pegs 2 and 3 and used 18 mm krill boilies in snowman presentations with yellow buoyant corn, over a scattering of baits.
Simon Davis, from Holmwood, had four carp, the biggest a 21 lb mirror, from peg 13 on NashBait 20 mm Candy Nut Crush, over a scattering of free offerings.

After last week’s two ‘thirties’, it was three ‘twenties’ that kept anglers occupied on Temple, the biggest to Mick Warren, at 28 lb 6 oz, and a brace to Andrew Hall, to add to his recent successes.
Mick, from Carshalton, landed his mirror carp from peg 9 on Mainline Cell in a snowman presentation cast tight to the pads over a few freebies.
And Andy had a 25 lb 8 oz mirror and a 22 lb common from peg 3, fishing to open water and in the margins.

The carp are catchable in good numbers, with the water temperature still warmish, on feeder or straight lead to the island margins or in open water on a pellet waggler, or down the edge on a pole later on.
And there are also roach and perch to be caught on pole or waggler, when the carp let you keep a bait in the water.

Charlie Watts, from South East London, has had several successful visits recently, the best day producing 23 carp to 10 lb, on glugged NashBait Pineapple Crush boilies over a bed of freebies.