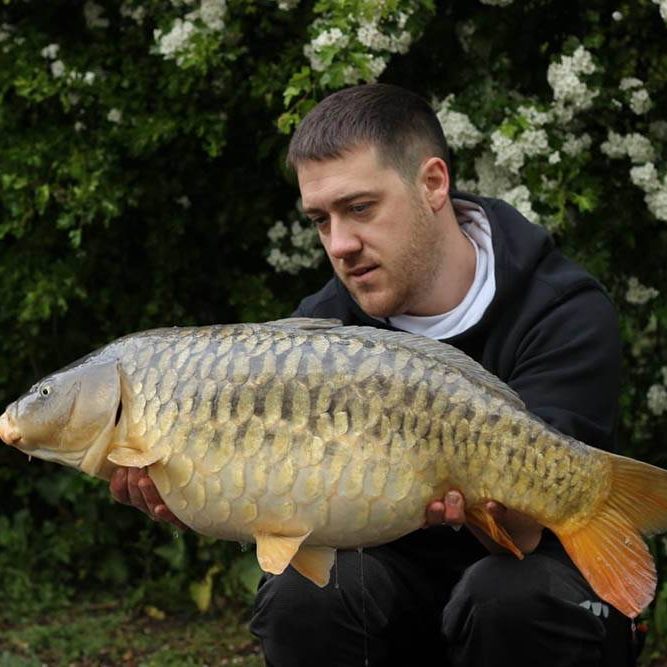 FISHERY OPENING TIMES
The fishery currently opens for day ticket fishing at around 7.00am on weekdays; 6.30am weekends and Bank Holidays. Current closing time is approximately 8.30pm.

THIS WEEK’S FISHING! (in brief)
Multiple catches of carp continue to be made, the best of this week’s action being a shared Old Lake haul of 34 fish between two anglers.
Lake regulars Richard Urquhart and Paul Downey were fishing in the middle of the Front Bank, and landed fish to 23 lb on Mainline Cell wafters.
Last week we reported how catchable the Old Lake tench are at the moment, but Milton Lake grabbed its share of the glory this week by providing two anglers with a shared 27-tench catch.
Visiting anglers Dean Roberts and John Laughton, from Hull, were kept busy for two days, fishing pellets and maggots on float or feeder, landing other species as well, while Jez Brown and Mark Hewer, from Oxfordshire, shared a 100 lb-plus Milton Lake catch.
And Temple continues to produce 30 lb-plus carp, this time a 31 lb mirror for Artur Truszynski, along with a 23 lb common, while Adam Rogers had a 29 lb common along with a 19 lb fully scaled.
Joe Holdsworth has sent in pictures of his catch, reported last week, which included Two Tone at 35 lb 10 oz.
There looks set to be a gradual warming of the weather this week compared to last, with an end to the chilly nights, perhaps until October. Whereas last week the average high was 14 degrees C, this week that is up to 17, and the overnight low up from a near-frosty 3 degrees on one day last week to no lower than 8 this week coming. It should be a largely dry week, though with more cloud than sunshine, but very light winds, and moving round from last week’s easterlies to north-westerlies and south-westerlies. Monday should be a couple of degrees up on Sunday, at 18 and cloudy, having been 11 overnight from the weekend, and 9 overnight into Tuesday, which should be a slightly more sunny 18, with 8 overnight into a cloudy Wednesday of 17, 8 again into another cloudy Thursday of 17, with 10 into Friday of 16 with cloud again, and 10 overnight again, but more sunshine on Saturday and 17, with 10 overnight into a sunnier Sunday of 17. Winds should start as light north-easterlies, becoming north-westerlies on Monday, though still light, the same on Tuesday, a bit stronger and more westerly on Wednesday, similar on Thursday but more south-westerly, more westerly on Friday, and a little stronger and north-westerly on Saturday and Sunday. So, a more pleasant and more fishy week, probably without enough heat to spur the fish into spawning, so a good chance to track down a few fish in calm and mostly dry conditions.

Angling pals Richard Urquhart and Paul Downey are no strangers to multiple catches of Old Lake carp, having had plenty of successful sessions, including a shared 31-fish catch in August 2017.
And the Addiscombe and Banstead pair’s latest visit also provided plenty of action, their 34 carp including a 23 lb mirror.
All were caught on 18 mm Mainline Cell wafters over free offerings, at pegs 14 and 16, casting towards the island.

Also enjoying carp action was another lake regular, Hugh Bonsor, from Leatherhead, who caught eight to 19 lb 8 oz in a 12-hour session on Friday, from peg 40, on the same single 18 mm Cell, in open water, using a kilo of boilies.
The Old Lake carp have had a go at spawning, but stopped when the weather cooled and the nights turned more chilly, so their focus is back on feeding until the next run of hot days.

Temple provided a fish of over 30 lb for the fourth week on the trot, this time Artur Truszynski landing a 31 lb mirror carp.

Artur, from Crystal Palace, was fishing peg 2, and he also had a 23 lb common, on a single 16 mm Sweetcorn boilie over a small amount of hemp.
Adam Rogers came close to a ‘thirty’ with his 29 lb common carp from peg 11, casting to the channel between the islands with a 15 mm Mainline Cell wafter and adding free offerings.
Earlier in his session he had landed a lovely 19 lb fully scaled, casting to the pads to the right of his swim, over a few freebies.
Last week we reported Joe Holdsworth’s capture of Two Tone at 35 lb 10 oz, one of four in his session at peg 14, the others being commons of 28 lb 10 oz, 28 lb 8 oz and 20 lb 8 oz.

He then added a 26 lb common and a 24 lb 1 oz mirror to take his tally to six fish, a seventh fish being lost to a hook pull.

He has sent in pictures of the fish, which were on JHBaits snowman presentations of 18 mm B4 boilies tipped with 12 mm pink Nuti-B pop-ups, fished in the gap between the islands and in the island margins, over a mixture of 16 and 18 mm B4, putting in 50-60 baits after each fish.

Two visitors from Hull, Dean Roberts and John Laughton, enjoyed two days on Milton Lake and then a day catching bream on a boat on the Old Lake.
Between them they shared 27 Milton tench, along with crucians, roach and perch, on float or feeder and pellets and maggots.
Another pair of regular visitors, Jez Brown and Mark Hewer, from Oxfordshire, had an “amazing day” of over 100 lb of tench and plenty of crucians.
The tench were to over 5 lb, and the dozen crucians to over 2 lb, on pole or a small Method feeder and maggots and casters, and they also had roach to over 1 lb, averaging 13 oz.
And famous angler Graeme Pullen visited Milton for some filming for his Totally Awesome Fishing website.
He was hoping for a big catch of crucians, but a dip in the temperatures meant he had to settled for 30 sizeable perch, along with roach, fishing waggler and double red maggot on a size 16 hook at dead depth, close to the lilies.