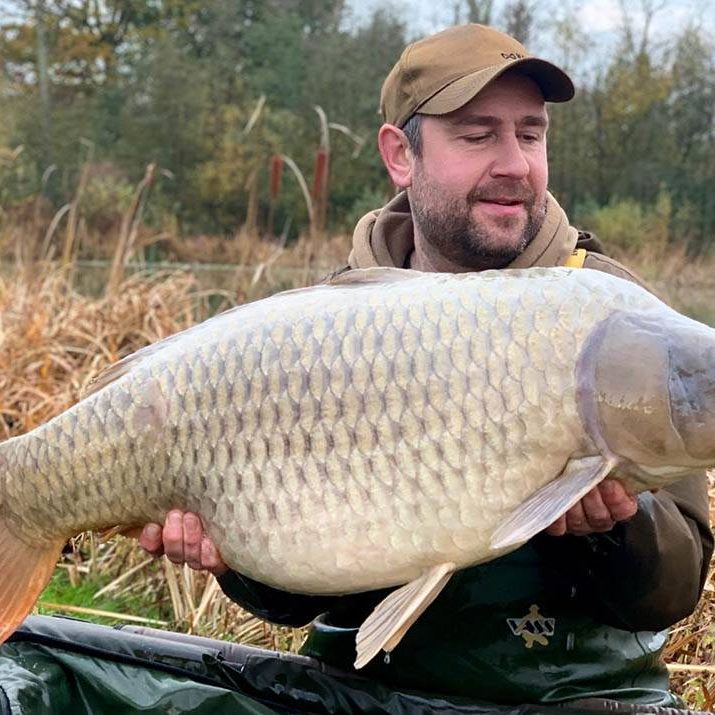 The fishery currently opens for day ticket fishing at around 7.00am on weekdays; 6.30am weekends and Bank Holidays. Current closing time is approximately 4.15pm.

THIS WEEK’S FISHING! (in brief)
Some great pictures have been sent in of the latest capture of The Ghost, in great condition and well up in weight on it’s August outing.
Captor David McCallum braved difficult weather the weekend before last that kept other anglers away from Temple’s banks, but was rewarded with a new personal best of 36 lb 14 oz, as reported last week.
The Old Lake bream are still keen to feed, despite a lot of rainwater having gone into the lake.
It took 32 lb 14 oz to win the midweek match, John Radford taking the honours, swapping between pole and feeder.
Despite the heavy rain, Tony and Jack Vary shared an eight-carp catch on the Old Lake during a 48-hour session, the biggest fish 17 lb.
All of these anglers will be pleased to hear that there is a settled week of calm and dry weather forecast, as a respite from the heavy rain of recent days.
After a chilly start to the week, especially at night, by next weekend temperatures should have crept into double figures, with no sign of frosts by then, as we move from dry and frosty to wet and mild on into next week. A cloudy Monday morning of 8 degrees C should give way to some sunshine in the afternoon, but with a frost overnight, as a low of minus 1 is expected in the early hours of Tuesday, recovering to a high of 6 and some sunshine, leading into an overnight temperature of 3, into a cloudy Wednesday of 7, with 4 overnight into another cloudy day on Thursday of 8, with 6 and light showers overnight into a drizzly morning on Friday, but dry and cloudy in the afternoon and 10, with 7 overnight into sunshine and light showers on Saturday and 10 again, with 7 again overnight into a wet Sunday of 11. Winds should start as moderate north-westerlies on Monday, becoming lighter as they change to south-easterlies on Tuesday, strengthening to moderate on Wednesday, and becoming more easterly on Thursday and Friday, but lighter south-easterlies on Saturday and the start of a run of fishy south-westerlies on Sunday. So, a quieter week, with a chilly night on Monday, but improving as the week goes on, though with an easterly edge to the wind until Sunday, when a low moves in and it becomes strongish, wet south-westerlies all the way.

It takes a lot to put the Old Bury Hill bream off the feed, match anglers having broken the ice in past seasons and still landed a good few.
On Wednesday, it still took 32 lb 14 oz to win the latest Open, John Radford finishing top from peg 69 using pole or feeder.
Second place went to John Swann, with 25 lb 5 oz from peg 13, also on pole and feeder, ahead of Brian Nesbitt with 24 lb 4 oz from peg 70 on feeder, and Keith Hogg on 22 lb 8 oz from peg 16, on pole or feeder.
Carp angling duo Tony and Jack Vary, from Uxbridge, shared a catch of seven commons and a mirror, the biggest 17 lb, during their 48-hour session.
Tony had five fish, on 16 mm Sticky Baits Manilla wafters over a scattering of baits, at peg 16, while Jack had three to 16 lb on 16 mm Mainline Cell, at peg 14.

Pictures of David McCallum’s capture of The Ghost at 36 lb 14 oz illustrate how venturing out in difficult conditions can end in huge satisfaction when the right result comes your way.
The Twickenham angler achieved a new personal best with the mint-condition fish, which gave him a real tussle for 25 minutes after two bleeps on his alarm at dawn the Sunday before last.
David was coming to the end of a four-night session that produced extremes of driving rain and hard frosts, but that gave him the whole lake to himself when he arrived.
He chose peg 9 after a couple of laps of the lake, and when he finally got his reward he saw in the light of his headtorch what he had hooked, which he said “wasn’t good for the heart rate.”
Fellow member Andy Hall came down to take the great photos of the fish, which was last reported back in August to Michael Oliver, at 33 lb 14 oz.
In early October of last year, The Ghost came out to Richard Daines at 36 lb 2 oz