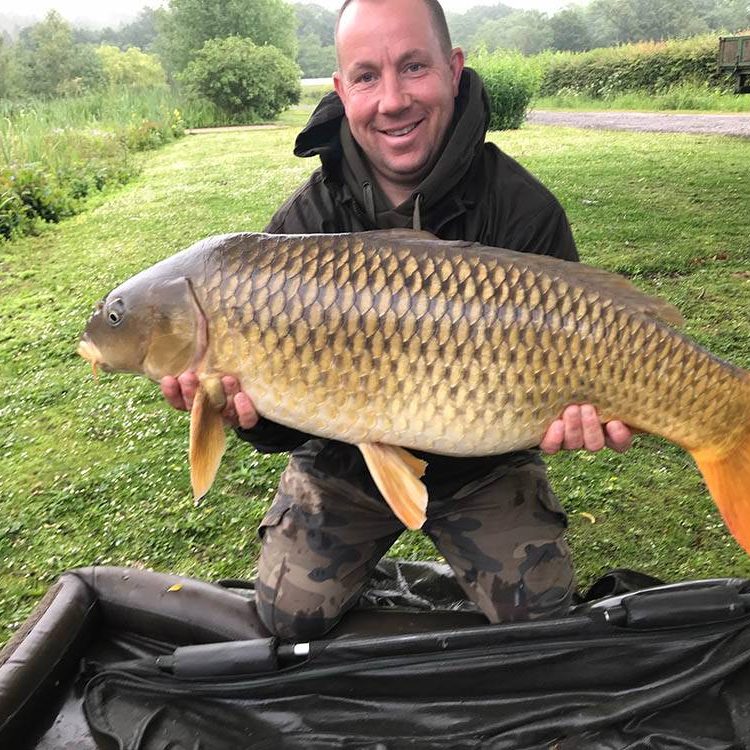 THIS WEEK’S FISHING! (in brief)
Carp anglers are mourning the loss of Bury Hill’s biggest fish, Nemo, after hearing that the famous mirror carp has been found dead in Temple.
Since the creation of the lake in 2002, Nemo has been on the wish list of anglers visiting the fishery, wanting to add their name to those who had landed Temple’s biggest prize.
Named after the cartoon fish in the 2003 Disney film Finding Nemo, Nemo was originally just one of several fast-growing stockies such as Robin Hood, Friar Tuck, the Sergeant, Two Tone, the Double-Row Linear and The Ghost.
But the fish outgrew them all, breaking though into the 40 lb class for the first time in style just after the Christmas break 2015 at 43 lb 3 oz, and endearing itself to those targeting it by putting in regular appearances on the bank, five times a year in 2017 and 2018.
Nemo was landed at a fishery record weight of 46 lb 4 oz last October, by Bob Winters, and was captured again in early April at 45 lb 8 oz by Aaron Warner, and then two weeks later by Jon Botting at 45 lb 1 oz.
Fishery owner David de Vere broke the news to anglers, saying: “Whilst we are all hugely disappointed at this loss of a much loved fish, life goes on and whilst trying to be positive, I feel I must stress that we still have two fantastic fish hovering around the 40 lb mark and a very good number of ‘thirties’ to target.
”We will never know why she died, but she was an old fish having been stocked nearly 20 years ago from Claremont Lake. Moreover she has just spawned, which for an old fish is always a very stressful event.
“We will be draining and netting Temple this coming winter to review all Temple’s fish, following which we will be stocking a large number of “twenties” from our stock pond, which we have been growing on for the past three years.
“R.I.P. Nemo – you brought a lot of happiness to many anglers.”

The bream fishing on the Old Lake is providing some superb sport, with over 40 fish landed by one angler.
After last week’s report of 36 bream landed by Simon White at peg 32, there was a catch of over 40 for Bob Thompson, from Smallfield, from peg 14
Bob fished both Method feeder and pole during his session, landing fish to 5 lb on 6 mm expander pellets.

Very heavy and prolonged rain accompanied by strong winds last Monday and into Tuesday kept many anglers away from the banks, but one angler who braved the conditions and benefited is Raymond Bateman.
Arriving on Sunday afternoon for 48 hours, Raymond set up in peg 3 and had an 18 lb 10 oz mirror carp on the first night.
Then, in the worst of the weather the following day, he hooked five carp, landing The Ghost at 36 lb 8 oz, along with a 25 lb 4 oz fully scaled, a 29 lb 1 oz common and a 29 lb 8 oz common, and having two hook pulls, one on a very big fish.
Successful tactics were Mainline Cell bottom baits cast to the island margins and the channel.
In action just prior to the rain, on that Saturday, was lake regular Ray Harding, from Mitcham, who landed a 24 lb 14 oz common from peg 6.
Ray used a snowman consisting of a 15 mm Sticky Baits Manilla bottom bait topped with a 12 mm Cell pop-up, cast to the island over a dozen boilies.
And this Saturday, Barry Godfrey, from Morden, landed a 29 lb common from peg 10, casting a Cell boilie tight to the brick ‘monk’ overflow.

Toby Taylor, from Bramley, landed 12 carp to 13 lb 8 oz from peg 8 on Saturday, casting 8 mm Dynamite Baits Robin Red pellets with a straight lead to the island and in the margins.