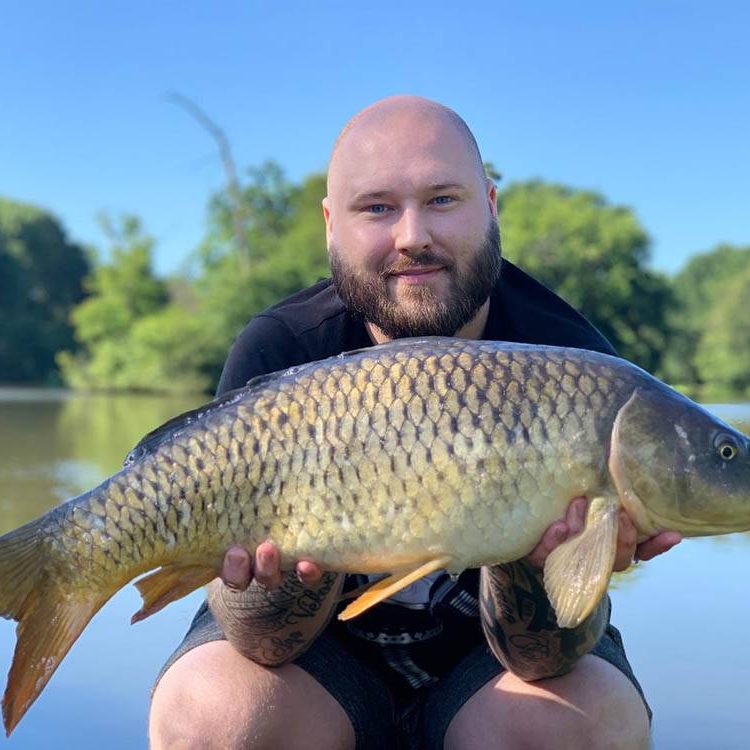 THIS WEEK’S FISHING! (in brief)
Three anglers who make an annual trip to Bury Hill for an extended fishing session together have landed almost 700 lb of carp and bream on their latest visit.
Adam Rogers, Dan Nash and Nick Driver banked 43 carp, along with a good number of bream, and could have had many more had they converted all of their runs into fish.
It shows how willing the Old Lake carp are to feed at the moment, before more hot and dry conditions arrive in August.
The same is true of Temple, where lake regular Mark Savage led the way with a trio of fish topped by a 30 lb 2 oz common carp.
And the Old Lake bream are also in an obliging mood, 53 lb being needed to win the Wiremill club midweek contest, with the potential for pleasure catches a fair bit higher.
There looks like being a bit of everything in the forecast this week, starting overcast and dry but becoming sunny with showers, and changing from light winds to a strengthening blow from the south west, but then dropping back again by the weekend, with an average high of 22 degrees C. The Full Moon plays its part on Tuesday, triggering a change from the recent high pressure and cool nights to usher in some rain-bearing south-westerly winds and 15 at night. Monday should brighten up in the late afternoon after a cloudy spell of no more than 20 degrees, with 11 overnight into a slightly warmer day on Tuesday of 23 with sunshine from lunchtime, and 13 overnight into a sunny start on Wednesday but becoming cloudy from lunchtime, which will keep the temperature at 15 overnight into a showery Thursday of 22 but with sunny spells, then 15 again overnight into an overcast but dry start of 20, with sunshine and showers for the evening on Friday, and then 15 again overnight into sunshine and showers to start with on Saturday with 22, giving way to a cloudy evening and 14 overnight into a Sunday of 23, and the likelihood of some real heat of upper-20s on Monday week. Winds should start as lightish north-easterlies on Monday, becoming lighter and more westerly on Tuesday, eventually becoming south-westerlies by the end of the evening and gaining strength to moderate on Wednesday, stronger again on Thursday and still south-westerlies, and stronger again on Friday, easing a little on Saturday and Sunday, but with the same constant direction. So, a fishy feel to the weather this week, with plenty of cloud, but with some sunshine, some warmish nights, some freshening rain and a good wind direction but nothing extreme, and the bonus that whatever the weather, it won’t stay the same for long.

Fishing friends Adam Rogers, Dan Nash and Nick Driver had an enjoyable four-day visit to the Old Lake, sharing a catch of 43 carp and a fair few bream for just short of 700 lb.
Fishing pegs 15, 17 and 19 respectively on the Front Bank, Dan landed 16 for 234 lb, his biggest six fish all weighing 17 lb.
Adam had 15 carp for 228 lb, the biggest a 25 lb mirror, and also a 23 lb common
Nick landed 12 for 166 lb, including a new UK personal best of 21 lb 4 oz, and another friend, Damo, visited them for an evening and added a 15 lb 4 oz mirror to the tally.
All of the fish fell to single of double 18 mm Mainline Cell pop-ups and 15 mm wafters and Pineapple pop-ups cast into the channel, with the bream in the margins on pop-ups and pellets
Also in action this week was Tomasz Przbylo, from London, who landed five carp to 16 lb, which was a common, along with lots of bream, fishing on pegs 74 and 75, using 18 mm Cell wafters over a bed of CC Moore Live System baits.
The Wiremill AC contest on Tuesday was won by Steve E with 53 lb 5 oz of bream from peg 1 on a feeder, ahead of Steve Parker on 37 lb 8 oz from peg 3, on pole or feeder.
Organiser Mike Bell was third with 37 lb from peg 10, and John Greenslade fourth with 34 lb 14 oz on feeder.

Lake regular Mark Savage has managed to land a trio of carp on his latest visit, and avoid the attention of the crayfish.
Mark’s biggest of this visit was a 30 lb 2 oz common, which he commented was in perfect condition, along with a 24 lb mirror and another fish of 17 lb.
He had two other chances, fishing peg 9 and casting towards the pads on the left-hand side of his swim, using dark baits, which seem to get left alone by the crayfish.
And Chris Nicoll, from Sittingbourne, landed a 25 lb 5 oz carp from peg 11, casting a Sticky Baits boilie to a showing fish.