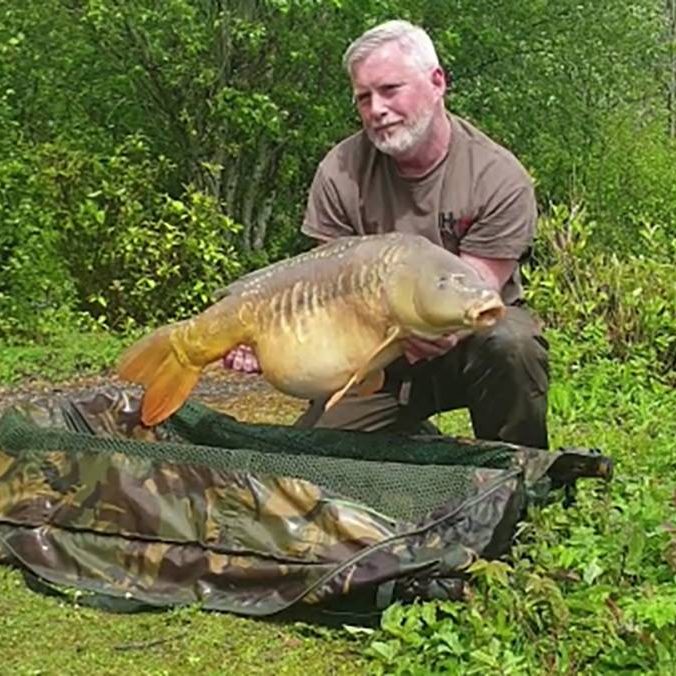 FISHERY OPENING TIMES
The fishery currently opens for day ticket fishing at around 7.00am on weekdays; 6.30am weekends and Bank Holidays. Current closing time is approximately 8.30pm.

THIS WEEK’S FISHING! (in brief)
Anglers associate tench with June and the start of the traditional coarse season, but May is a great month to target them, as this week’s catches prove.
Peter, from Hounslow, landed 11 of them, from peg 2, along with five carp, and Paul Simpson landed five to 6 lb when fishing for bream.
Some anglers believe that they are stirred out of the winter dormancy by wanting to rid themselves of parasites that attach themselves when they are close to the lake bed in winter.
But whatever the reason, they make a very enjoyable diversion from other species at this time of year, and are perhaps at their most catchable in terms of numbers.
Temple Lake produced two more ‘thirties’ this week, in the form of Two Tone at 35 lb 10 oz to Joe Holdsworth, and a 33 lb common for Adrian Wood, fresh from his six-fish catch on the Old Lake the week before.
And Andrew Hall was particularly impressed with a ‘chocolate orange’ common carp of 23 lb 4 oz that he landed.
The Old Lake bream are feeding really well, Ray Smee winning the Priory Farm AC contest, on the Front Bank, with over 40 fish for 65 lb 14 oz.
And Bonds Lake is also fishing well, Brian Northfield landing 14 carp to 10 lb fishing a pole float in the margins.
There is plenty of warm, dry weather in the forecast this week, with light winds for most of the week, changing as the weekend approaches to cloudier skies, from the blue skies and calm days that came before, as an area of high pressure settled over the country. Monday looks like being a very sunny 16 degrees C with blue skies all the way, falling to 5 overnight, having been 3 the night before, and the same 16 on Tuesday, going down to 6 into the same again on Wednesday, with 6 into a slightly more cloudy Thursday of 15, as the switch begins, and 8 into a cloudy Friday of 14, staying at 9 overnight due to the cloud cover, into another cloudy day on Saturday of 16, with sunshine and showers moving in late in the afternoon as the Full Moon arrives and takes over the weather pattern, bringing an end to the high pressure. Sunday looks to be wetter, but with double-figure temperatures before and after, 14 at night and 16 by day, with similar warm and wet weather on Monday week. Winds are set to be north-easterlies all week, starting very light on Monday, gaining a bit of strength on Tuesday but still light, a little stronger still on Wednesday and Thursday, but a bit lighter for Friday, Saturday and Sunday. So, a very pleasant week, if not an obviously fishy one, but improving towards the weekend as the cloud cover makes it easier to hide line and hooks from the fish than in the bright weather, and the nights becoming more mild. And the outlook for the week after is a further drift away from the high pressure of sunny days and blue skies to more cloud and rain.

Tench come high on every angler’s list of favourite fish, and now is a perfect time to catch them, because they are active in large numbers and feeding well.
Peter, from Hounslow, landed 11 from peg 2, which is close to their favourite haunt in the Jungle, on legered pellets and small boilies, while loosefeeding pellets, and also had some bream and five carp.
And Peter Simpson, from Banstead, had five to 6 lb from peg 4, along with 35 bream to 5 lb, on a Method cage feeder 40 metres out, and 6 and 8 mm Sonubaits Band’ Ums.
Bream are also a good target at the moment, the Priory Farm AC match on the Front Bank being won by organiser Ray Smee, who landed 65 lb 14 oz of them, over 40 fish, from peg 23.
Ray used an 11-metre pole and double red maggot, topping up his swim with a Matrix Toss Pot every put-in, having started his swim with three balls of groundbait laced with casters and dead maggots.
Runner-up was Terry Pitman with 41 lb 8 oz from peg 1 on pole, followed by Tony Lockyer with 38 lb 8 oz from peg 3, and John Poulton on 30 lb 10 oz from peg 4.
Sam Goodwin, from Fetcham, landed three carp to 20 lb from peg 5 on 12 mm Mainline Cell baits.
And Chris North made a short session memorable with a 20 lb-plus common, fishing tight to overhanging trees.
A single 18 mm Mainline Essential Cell boilie cast close to the far bank produced the fish, ten minutes before he was due to pack up in mid-afternoon, along with a bream.

Another two Temple ‘thirties’ makes it three weeks on the trot of fish of over 30 lb, the latest being Two Tone at 35 lb 10 oz to Joe Holdsworth, this weekend, and a 33 lb common for Adrian Wood on Saturday.
Joe’s fish was one of four in his session at peg 14, the others being commons of 28 lb 10 oz, 28 lb 8 oz and 20 lb 2 oz, all on JHBaits snowman presentations of 16 mm boilies tipped with 12 mm pop-ups, fished between the islands.
Two Tone was last reported in March to Ray Harding at 35 lb 12 oz, and in May last year it weighed 36 lb 2 oz, to Jon Botting.
Adrian has been enjoying success on the Old Lake, with a six-fish catch the week before, and a 24-hour session on Temple produced something a good deal bigger.
The Basingstoke angler fished a single 15 mm Mainline Cell wafter tight to the island over 3-4 freebies.
Also in action was Andrew Hall, who followed up a 22 lb 8 oz common with a 23 lb 4 oz ‘chocolate orange’ common that gave him a real tussle, along with a sizeable mirror carp that came off at the net, all at peg 3.
Last week we reported how lake regular Mark Savage had a brace of upper-‘twenties’ and lost a third fish, and he has sent in pictures of his catch, which was from peg 9, fishing the left-hand margin.
Mark’s mirrors went 27 lb 4 oz and 25 lb 8 oz, and fell to trimmed-down Pineapple pop-ups with a Liver stick mix.

Brian Northfield, from Hickstead, landed 14 carp to 10 lb fishing a running line and a pole float in the margins, using pellets and corn while feeding 2 mm pellets.

Ray Parker had a busy session on Sunday, landing 12 crucians, and eight tench to 4 lb, on float fished luncheon meat and double maggot over a bed of cupped-in hemp, in the ‘lilies swim’, peg 23.