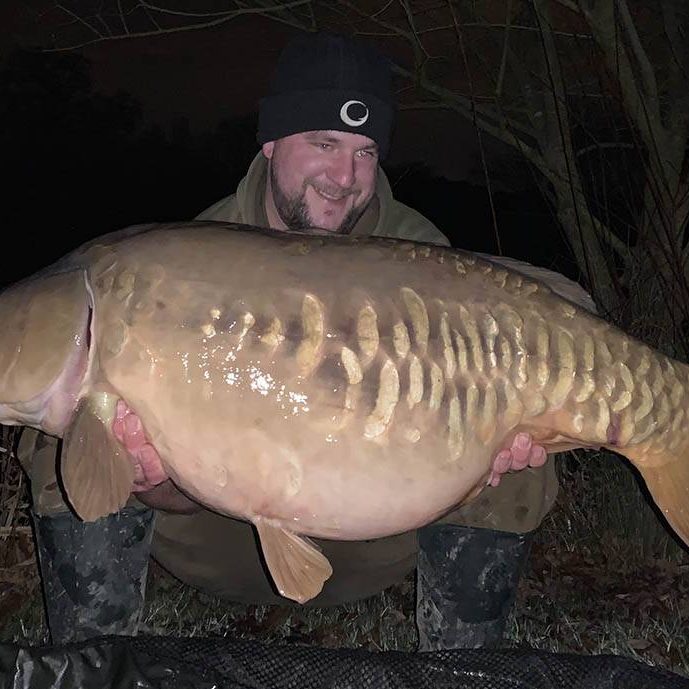 FISHERY OPENING TIMES
The fishery currently opens for day ticket fishing at around 7.00am on weekdays; 6.30am weekends and Bank Holidays. Current closing time is approximately 4.00pm.

THIS WEEK’S FISHING! (in brief)
They say that effort equals reward, and car-less Chris Bean proved it with another four fish during his latest visit, topped by a 22 lb common.
Eltham angler Chris takes two trains and then walks from Dorking station, but he added to the nine carp that he landed on a visit in the week before Christmas.
Matt White has sent in pictures of his capture of Bury Hill’s latest 40 lb fish, the Double-Row Linear, which he landed at 40 lb 14 oz, along with a 24 lb common, as reported last week.
A new series of Wednesday matches run by Steve Gardener began this week, and produced a winning weight of 47 lb of bream, Charlie Lovell taking the honours from peg 75, behind the island.
With the annual netting over on Bonds, it didn’t take long for the fish to get back to feeding, Alan Derbyshire landing four carp on Friday on Method feeder, to go with the three that he caught fishing the same way the week before.
And temperatures look to be reaching double figures again for most of this coming week, well up on normal January levels, with south-westerly winds, so it could pay to make the most of it in case things go the other way in February.
Monday should have a bright start and provide 10 degrees C, before cloud in the afternoon and some showers in the evening, with 7 overnight into Tuesday, which should be dry in the morning but showery in the afternoon, with a high of 11 and staying at 8 overnight into a very sunny Wednesday of 10 giving 6 overnight into an overcast Thursday of 11 with afternoon showers, then 7 overnight into a very sunny Friday of 9, falling to 3 overnight under the clear skies and 6 on a very sunny Saturday, with 2 overnight into a fairly sunny Sunday of 8, before a return to double-figure highs for Monday and Tuesday week. Winds should start as strong south-westerlies on Monday, gaining in strength on Tuesday as a big low moves in, falling back to moderate on Wednesday, a bit stronger and more southerly on Thursday, lighter on Friday and more westerly, then falling light on Saturday and north-westerly, before becoming strongish south-westerlies again on Sunday, and then going around to the north. So, the strong south-westerlies and mild temperatures on Tuesday and Wednesday should provide a good chance of a feeding spell ahead of brighter days and cooler nights later in the week.

Chris Bean always manages to make the most of his visits to the Old Lake, and this time it was four carp that he added to his tally.
Fishing peg 2 on Sunday and Monday, and casting half way to the channel, he landed a 22 lb common, an 18 lb koi mirror, and two 15 lb carp, all on CC Moore Pacific Tuna boilies.
The Steve Gardener Wednesday series got off to a good start with a 47 lb winning weight among the 24 anglers.
Charlie Lovell, from Kent, took the honours, from peg 75, with 47 lb of bream on feeder.
John Radford was second with 39 lb 4 oz from peg 33, ahead of Shawn Sylvester with 35 lb from peg 74, and Paul Hoffman with 32 lb 12 oz from peg 70.

Matt White has sent us pictures of his capture of the Double-Row Linear, at 40 lb 14 oz, the first time that it has been reported at over 40 lb.
Matt’s UK personal best was part of a two-fish catch, the other being a 24 lb common, on a three-day session, at peg 9.

Alan Derbyshire was back for more action on Friday, and added another four carp to his total, once again on a small Method feeder and 8 mm pink pop-ups for fish to 10 lb.