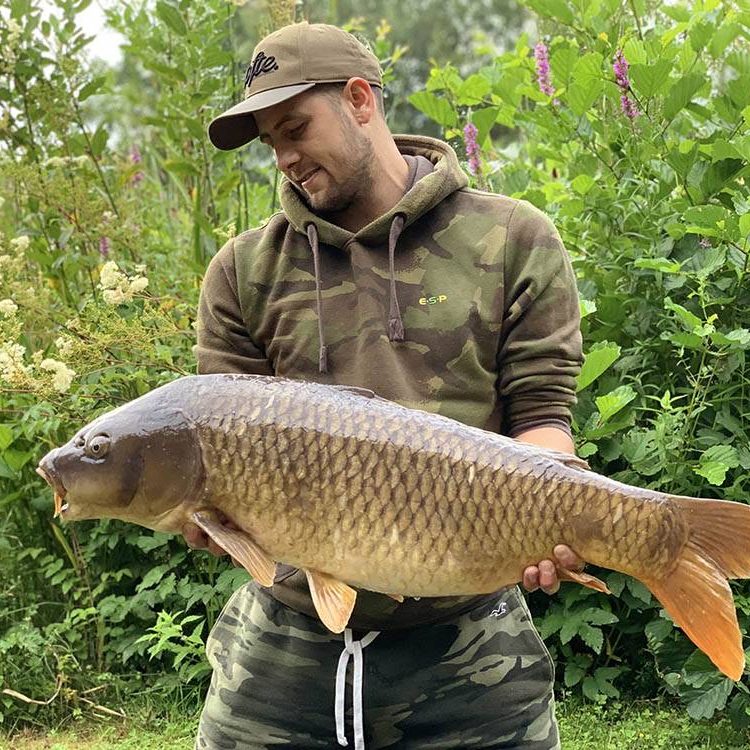 The fishery currently opens for day ticket fishing at around 7.00am on weekdays; 6.30am weekends and Bank Holidays. Current closing time is approximately 8.30pm.

THIS WEEK’S FISHING! (in brief)
Numbers of carp are being caught again on Temple Lake, including a 30 lb mirror.
Ben Leaver landed the fish, and a common of 19 lb 8 oz, while there were three carp for Dale Burrows, topped by a 27 lb 14 oz common, and Peter Russell had a 28 lb common.
Bonds Lake continues to produce good numbers of fish, Alan Derbyshire landing 15, casting boilies and a feeder tight to the island.
The Old Lake provided two anglers with a shared 14-carp catch that would have been more had they not needed to reel in at night because of heavy rain.
And a weighed and witnessed 2 lb roach was the highlight of a catch of 15 crucians and ten tench to over 5 lb for Richard Goodchild on Milton Lake.
There’s been a noticeable drop in the temperature since last week, with an average expected of 19 degrees C, compared to 23 in the week just gone, but with less rain and lighter winds as a respite from the recent storm. Monday is likely to be showery but with some sunshine and 19, dropping to 11 overnight as skies clear from mid-afternoon, to give a sunnier and dry Tuesday of 19, with 12 overnight, into a wet Wednesday of 18 but with some sunny intervals, and 14 overnight into a dry and sunny Thursday of 20, due to the Full Moon, falling to 12 overnight into a dry but cloudy Friday of 19, with 14 overnight into a Saturday of 19 and sunshine and showers, with 14 overnight into a Sunday of 18 and more sunshine and showers. Winds should start as lightish westerlies on Monday, becoming moderate on Tuesday, and strong and more south-westerly on Wednesday, moderate on Thursday and more westerly again, the same on Friday, and stronger and south-westerly again on Saturday, easing a bit on Sunday and again on Monday week, still from a south-westerly direction. So, again a fishy week if you can brave the showers and lively winds, which are not expected to be as strong as the week before, but enough to stir the fish into action, especially as it’s August, but it’s feeling more like late September.

Wet and windy weather such as anglers experienced last week can be a blessing and a trial.
Carp are encouraged to feed, but conditions on the bank can be testing, as Paul Jeffery and Paul Fletcher found out on a 48-hour session.
They shared a catch of 14 carp from 13 lb to 18 lb 8 oz, all in “tip-top condition”, but “brought the rods in at night because of heavy rain.”
All were caught on double 15 mm Dynamite boilies with small PVA bags and free offerings catapulted around the area.

With low pressure in charge of the weather over the past week, there have been more captures than in recent times, including a 30 lb mirror carp.
Ben Leaver, from Leatherhead, was the successful angler, also landing a 19 lb 8 oz common, fishing peg 12 with single 20 mm fishmeal boilies over a few freebies.
Bailiff Dale Burrows was part way through his session when we reported on his 19 lb fully scaled last week, and he added other fish of 27 lb 14 oz and 16 lb, the first a common and the second another fully scaled, all on DSTR Baits boilies cast to the island.
Peter Russell, from Coulsdon, was also in action, landing a 28 lb common carp from peg 14, on an 18 mm boilie with a 10 mm Topper, over a few freebies.
And bailiff Sam Sawyers landed a 23 lb 4 oz common and a 19 lb 6 oz two-tone mirror from peg 12, on 14 mm DSTR Baits Nut-Trix pop-ups over a handful of chopped and whole baits.

One angler who enjoyed plenty of action is fishery regular Alan Derbyshire, from Epsom, who landed 15 carp to 7 lb on Saturday.
Alan fished peg 11 with a Hybrid feeder cast tight to the island, using 8 mm Shellfish mini boilies, and groundbait and 2 mm pellets in the feeder.

Richard Goodchild enjoyed a memorable capture when he landed a roach of exactly 2 lb to crown a successful day’s fishing with a small Drennan maggot feeder.
The Tenterden angler also had 15 crucians and ten tench, five of which were over 5 lb, along with the big roach, which was weighed and witnessed, all on white maggots with two on the hook.