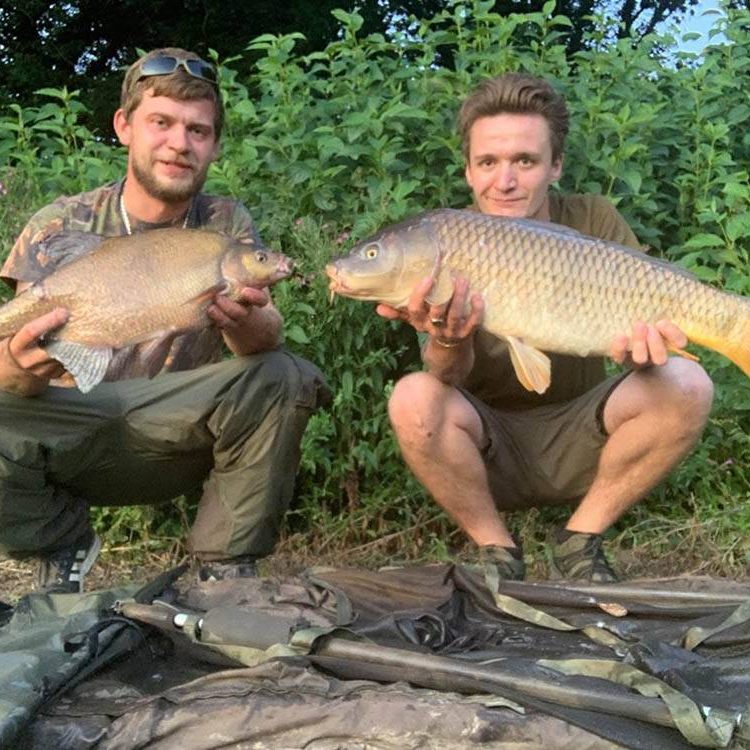 The fishery currently opens for day ticket fishing at around 7.00am on weekdays; 6.30am weekends and Bank Holidays. Current closing time is approximately 8.00pm.

THIS WEEK’S FISHING! (in brief)
Carp anglers on the Old Lake are finding numbers of fish from all around the lake, including in the often-overlooked bottom bay.
The Front Bank and behind the island, or the middle of the Long Bank, are usually the first choices, but those who explore can find fish in other areas as well.
John Graham had memorable weekend visits two weeks running when he banked four personal best, topped by a 26 lb mirror.
His first catch, of 12 carp came from peg 2, then he had five from peg 72 a week later, and Jonathan Cummings had eight from peg 53 in the bottom bay.
The Old Lake’s bream still favour the main body of the lake, the midweek match being won with 57 lb from peg 3.
Temple is still producing a fish or two ahead of the usual big feeding spell in late September and early October.
Lake regular Jose Garcia banked an attractive fully scaled weighing 24 lb 7 oz to add to the 31 lb 9 oz fish that he caught back in May.
Now that the heatwave temperatures have subsided, there is a pleasant week in prospect, with plenty of sunshine and an average of 20 degrees C, winds that are not too lively, and just a light shower to freshen things up.
Monday should be a mixture of sunshine and cloud with 20 degrees, falling to 13 overnight into a bit cloudier Tuesday of 21, with 14 overnight into a sunnier Wednesday of 19, but with showers at the start, then 10 overnight into a very sunny Thursday of 18, then 11 into a cloudier Friday of 18 and 11 into a bit more sunny Saturday of 18, with 10 overnight into a Sunday of the same. Winds should start the week as lightish westerlies, becoming a little stronger on Tuesday and briefly strong at lunchtimes on Wednesday, Thursday, Friday and Saturday, easing to moderate each day in the mornings and evenings, maintaining the same direction until Thursday, when a more northerly edge should take over for a day, back to westerlies on Friday, but north-westerlies again on Saturday, falling light on Sunday. So, a pleasant week to be outdoors, with a fishy direction to a brisk wind, and although temperatures at night look set to take a bit of a dip, they should stay in double figures, but giving the fish a hint of autumn around the corner.

It’s a good time to catch numbers of carp and bream at Bury Hill, with the water temperature warm but the air temperature giving a hint of cooler weather around the corner.
John Graham, from Wallington, took advantage of the chance, beating his personal best four times, as well as catching lots of bream.
Having landed two ‘twenties’ in his 12-carp catch last weekend, from peg 2, he came back this weekend and had five more carp, the biggest a 26 lb mirror, this time from peg 72, behind the island.
All of his fish fell to 18 mm boilies tipped with pieces of pop-ups in snowman presentations, along with PVA bags of hemp and krill pellets.
And Jonathan Cummings had a catch of eight carp to 16 lb on Thursday, and he found them in the bottom bay, an often-overlooked area of the lake.
Jonathan fished peg 53 with 18 mm Carp Company Icelandic Red with Caviar & Cranberry boilies.
The lake’s bream are also keen to feed, Mark Hathway’s midweek match being won by Dave Johnson with 57 lb of them on pole at peg 3.
Runner-up was organiser Mark with 52 lb 8 oz, from peg 11 on pole and corn.
Tony Morris took third with 50 lb 12 oz from peg 13 on feeder or long pole, and Alan Adams fourth, with 45 lb 10 oz on groundbait feeder at peg 1.
Last week we reported how Chris Stratford, from Bromley, was kept busy with a catch of carp to 19 lb while fishing from peg 2, ten of his fish being commons, and a much bigger fish coming off.
And his brother Josh, from Horley, landed six bream to a specimen weight of 9 lb and a 24 lb 2 oz common, on 18 mm CC Moore pop-ups tipped with buoyant corn, both anglers finding single baits with no freebies worked best.
They have sent in a photo of a couple of their fish.

Jose Garcia has had success in the past on Temple and also on the Old Lake for carp and zander, and he added to his tally with a 24 lb 7 oz fully scaled on Tuesday.
Fishing a 24-hour session, he used a home-made Peach boilie on a Ronnie rig over a few scattered free offerings.