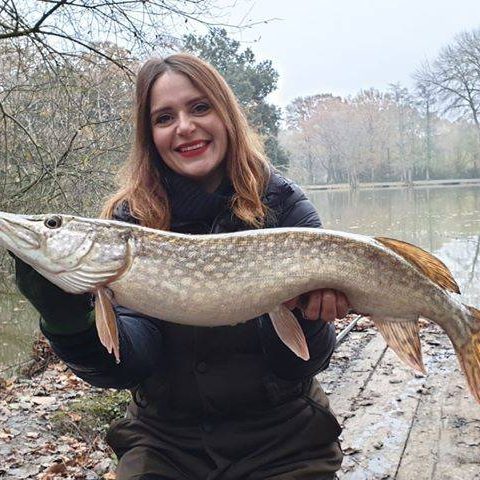 FISHERY OPENING TIMES
The fishery currently opens for day ticket fishing at around 7.00am on weekdays; 6.30am weekends and Bank Holidays. Current closing time is approximately 4.15pm.

THIS WEEK’S FISHING! (in brief)
Taking advantage of short windows of opportunity when fish are feeding avidly is a big part of autumn and winter fishing, as recent catches show.
Mild weather prior to the run of frosts that started on Friday produced good results, suggesting that the fish were keen to feed ahead of the cold snap.
Barni Kocsis fished a 48-hour session on the Old Lake just ahead of the freeze, and had 14 carp, the best a 22 lb common.
Matchman Rob Draisey and his son had a pleasure session of 20 bream to 5 lb just before the cold weather.
And Andy Stone landed a personal best 10 lb zander along with a number of zeds during three days of fishing.
And the good news is that although there are a few more days of heavy frosts, including a real deep freeze on Monday night, the temperatures are set to rise just in time for the weekend, with double-figures by day and 7 degrees C at night forecast for Saturday, along with a good south-westerly blow, and without much rain with it.
Monday looks set to follow the current pattern of a frosty night and bright day, with minus 1 overnight from Sunday, followed by a day of unbroken sunshine, but no more than 5 degrees, and then the coldest night of the week, at minus 3, into another very sunny day on Tuesday and 5, staying at 1 degree overnight into a cloudy Wednesday of 5, falling to zero overnight into another cloudy day on Thursday of 7. But then there’s a change in the night-time values to 6 overnight into a cloudy Friday of 11, with a shower expected at around sunset, and a balmy 7 overnight into a cloudy Saturday of 9, with 6 overnight into a mild Sunday of 11, and then 9 on Monday week. Winds are expected to start the week as lightish north-westerlies, dropping to almost nothing on Tuesday and Wednesday, until Thursday night, when they are expected to become south-westerlies, growing to moderate and then strong during Friday, easing a little on Saturday with a bit more westerly, and stronger again on Sunday and Monday week. So, a classic week of two halves, from a deep freeze on Monday night to a double-figure high on Friday, when the fish should take the opportunity to go on the feed.

It was cloudy and mild when Barni Kocsis set up on the Old Lake’s peg 18 for a 48-hour session, and by the end the Croydon angler had landed 14 carp, the biggest a personal best 22 lb common.
Barni had others of 19 lb, 18 lb and 17 lb, most of his fish coming between 4-9pm, all on 14 mm CC Moore Pacific Tuna boilies with PVA bags of freebies.
Rob Draisey and his son also enjoyed the mild spell, sharing a catch of 20 bream to 5 lb, along with a 6 lb pike that took a maggot.
The pair from Lingfield were fishing peg 69 with feeders and three red maggots cast to the end of the island.
On the predator front, Andy Stone set a new personal best with a zander of exactly 10 lb during a three-day visit.
Andy, from Harlow, was fishing with Barry Howard, from Hitchin, and they shared several other zeds and a pike, Andy using a roach tail at peg 7 for the biggest one, which was landed during the daytime.
And Kelly Inglis Crush caught a sizeable pike on a small roach deadbait coated with BioEdge Bloodworm Potion.
It’s worth noting that the Old Lake will be closed all day next Sunday (December 8) for a predator competition to be fished by over 40 anglers, arranged by the Polish Anglers Association, but will be open as usual on Saturday and back to normal again on Monday.

A slower week for reported catches on Temple, after a hectic spell of ‘thirties’ at the start of November, including The Ghost and The Parrot.
But the mild spell this Friday, Saturday and Sunday could well produce another flurry of action, for those looking for an opportunity, before some cool nights again for the week after.

Mark Boardman, from Worcester Park, landed five sizeable carp, the biggest 14 lb, last Sunday, four of them commons and one a mirror, fishing a straight bomb and pop-ups at peg 4, over some loose offerings.